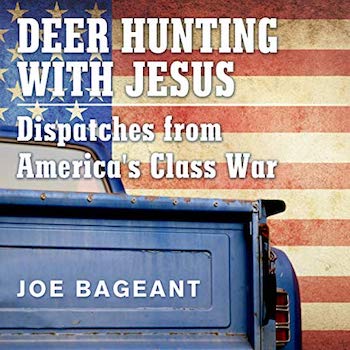 “Well, good lordie, you really was writin' a book! I thought it was just some bullshit you spread around when you got drunk.”

That was my friend Fat Larry’s reaction when I showed him the Amazon.com prepublication sale of my book a few days ago.

Contrary to what one might suspect, the name change had not as much to do with the word “fuck” as it did the fact that a book was recently released with a very similar title.

So, after much kicking around of other titles, Deer Hunting With Jesus was chosen because it is in the spirit of the book and the people within its pages, hopefully with a satisfying dose of humor in the mix. Deer hunting and Jesus do come together in the book (in fact, there are Christian Deer Hunter’s Associations, Google it) in what I hope gives insight to the working class flyover America that hunts, prays, work like dogs and voted for the Dub -- twice.

The book is a non-fiction work, not a collection of essays or a collection of previous online material, although there are some parts of essays included. In a sense however, it is a series of linked essays, with the people from my home town recurring throughout, those working Americans who grease our cars and wipe the asses of America’s elderly in nursing homes, or sit at terminals all day doing mindless meaningless work under the eye of the management classes.

And, if I have done this damned thing half right, I may have demonstrated that real working-class conservatives are by no means stupid or particularly mean spirited. Given some time to catch their breath from debt slavery, and some honest news, they can see who is picking their pockets and killing their kids in Iraq.

Take away all the hubris, ego, greed and knee-jerk politics of both sides of this tiny bandwidth we let pass for a “political spectrum,” and we find that most of the commonalities ordinary Americans used to enjoy still exist -- the kind of commonalities and equal respect we acknowledged back when liberals still owned guns and even the most conservative Christians understood that the Constitution and the Bible were two entirely separate documents.

I don’t really know what else to say. You folks know me pretty well. You even know my friends here in Winchester, Virginia, although by pseudonyms. And I feel like I know you, thanks to the thousands of powerful, blunt, funny, heart-rending and profoundly honest emails in which you have shared your lives with me.

So finally, there it is on Amazon. No cover image on Amazon yet, but the last time I saw the cover it looked pretty good. Somewhere along the line before its April 24, 2007, release date the rest gets filled in. You can preorder it now and save $8.50. Here is the link and the description at this early point in the game:

Deer Hunting With Jesus: Dispatches From America’s Class War. This title will be released on April 24, 2007; 288 Pages; Pre-order now. Ships from and is sold by Amazon.com. Random House Crown release date, April 24, 2007.