Deer Fights Back Against Hunter Who Shot Her | Hilary Hanson 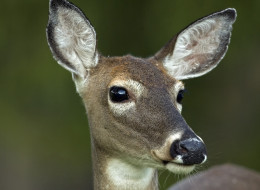 More feisty than she looks (Huffington Post)Jan. 5, 2015 (Huffington Post) -- A Wisconsin bow hunter had the tables turned on him when a deer he shot with an arrow fought back and sent him to the hospital.

The 72-year-old shot the deer in the leg, wounding her, near Taycheedah on Friday.

When he attempted to track the doe, she “leaped out and went after him” while he was amidst “some thick brush” Fond du Lac Sheriff's Officer Jeff Bonack told the Fond du Lac Reporter. The feisty deer then head-butted his leg and fled the scene.