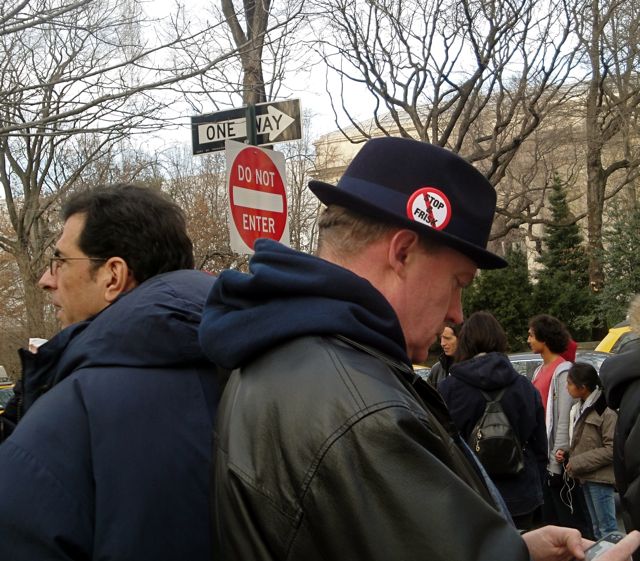 "The NYPD is out of control, and the culture and practices of the Department need a full-scale overhaul.” --NYCLU Executive Director Donna Lieberman

No one has to tell those involved with Occupy Wall Street (OWS) that the NYPD is "out of control" and my next article will touch on this (and related) issues. However, even with all the overt repression being heaped upon occupiers across the globe, we must never forget those communities who have endured for generations under the racist tyranny of the State.

For example: From 2004 to 2011, according to the New York Civil Liberties Union (NYCLU), more than 4 million innocent New Yorkers were subjected to police stops and street interrogations. The vast majority of those being stopped and frisked are black and Latino and roughly 9 out of 10 are innocent.

If this doesn't get your blood boiling, you might wanna re-read the Fourth Amendment of the U.S. Constitution: "The right of the people to be secure in their persons, houses, papers, and effects, against unreasonable searches and seizures, shall not be violated, and no Warrants shall issue, but upon probable cause, supported by Oath or affirmation, and particularly describing the place to be searched, and the persons or things to be seized."

Now, check out the NYPD "Stop and Frisk" breakdown for 2011:

Not even the corporate media is falling for it, with the New York Times explaining: "In 2002, when Mr. Kelly last took office, officers stopped 97,296 New Yorkers and the city reported 587 homicides. Last year, those numbers were 685,724 and 532."

For those not quite getting the skin color angle, the Times added: "Even in vastly white neighborhoods, like the Upper East Side and Greenwich Village, the police stopped far more blacks than whites."

More from the NYCLU:

“The mayor and commissioner need to give up the spin and recognize that the NYPD’s stop-and-frisk program is fundamentally broken," says NYCLU Executive Director Donna Lieberman. "The NYPD is out of control, and the culture and practices of the Department need a full-scale overhaul.”

#Occupy4HolisticJustice
The culture and practices of radical activism could use some re-evaluation while we're at it. The big picture of holistic justice must never be forgotten and in this case, that means reaching out in solidarity to our sisters and brothers who remain daily -- hourly -- targets of State repression.

It means occupying the hood.

It means recognizing and assisting the efforts of the grass roots activists in these communities, learning from them, and when necessary, offering on-site support and sheer numbers in the areas most in need.

Please allow me to share a related activist anecdote...

Through hunger strikes, imprisonment, abject poverty for himself and his large family, racist and corrupt judges, exposure to dangerous pesticides, and even assassination plots, Cesar Chavez (an "occupier," if there ever was one) never stopped fighting alongside his fellow migrant laborers of the United Fruit Workers.

His plight impacted mostly Mexican immigrants yet did not go unnoticed by their more privileged comrades. In 1966, when Teamster goons began to rough up Chavez's picketers, a bit of labor solidarity solved the problem. William Kircher, the AFL-CIO director of organization, called Paul Hall, president of the International Seafarers Union.

"Within hours," writes David Goodwin in Cesar Chavez: Hope for the People, "Hall sent a carload of the biggest sailors that had ever put to sea to march with the strikers on the picket lines. There followed afterward no further physical harassment."

Mic Check: Sometimes the first step towards solidarity is showing up.

For those not near NYC, why not organize a similar event in your city or town? Why not connect with your local occupation to broaden the coalition and grow the unity?

If you feel righteous outrage at the biased and illegitimate practice of stop and frisk; if you believe all of our grievances are connected; if you want to link with America's most oppressed communities, it's time to occupy the hood.

If you can envision a culture in which holistic justice is the guiding principle, it's time to occupy everywhere.

Endnote: If you'd like to reach out and connect with those already incarcerated within the racist and classist Prison-Industrial Complex, check out: Write a Prisoner, Prisoner Solidarity, or the Prisoner Correspondence Project. Let them know that they are not alone.