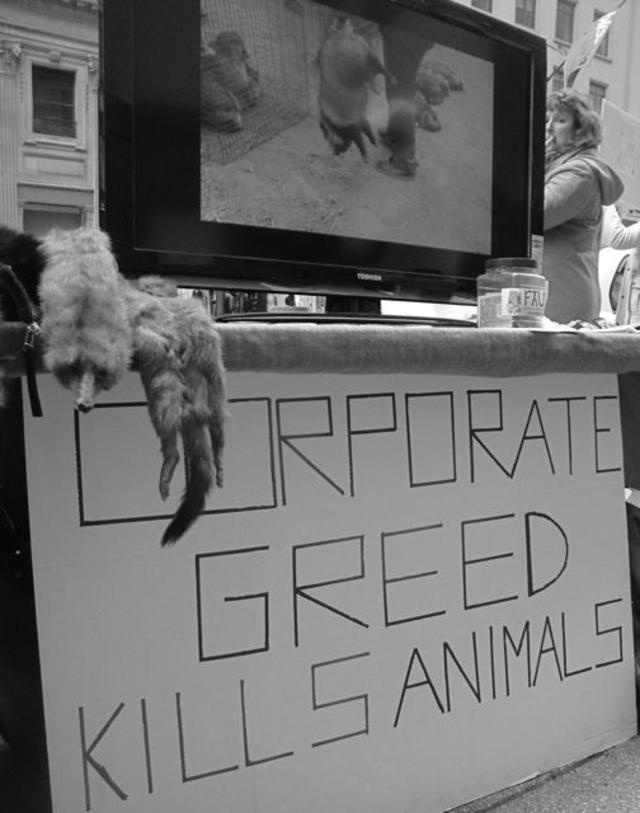 “All I know is just what I read in the papers, and that's an alibi for my ignorance.”

It’s fascinating to witness the intellectual gymnastics required to rationalize speciesism. So often, when animals are abused, confined, tortured, or killed, the perpetrators and benefactors hide behind lies about the victims’ lack of feelings, awareness, and sentience.

However, when humans set about justifying systematic, premeditated murder, they never hesitate to produce headlines like this from a New York Times article March. 22, 2013: “The Sly Coyote Becomes a Bounty Hunters’ Target in Utah”

As if to even out the playing field between hunted coyotes and armed human mercenaries, the “dumb” animal becomes “sly” and thus, a more worthy target for state-funded serial killers.

Corporate Journalism 101
Times journalist (sic) Melena Ryzik opens the article by deftly leading readers down the intended path: “Spencer Glauser, who started hunting as a boy perched on his father’s shoulders, is an unabashed coyote hater. ‘One’s too many’ to have roaming the mountains and encroaching on towns, he said.”

Corporate media message: Hunting is a meaningful experience passed down by loving fathers. Wiping out a species is acceptable behavior. “Encroaching” is bad only when the accused are non-humans.

Some of what they omitted: Coyotes use a wide variety of vocalizations in order to communicate with one another. Howls, yelps, and high-pitched cries are best known, but they also bark, growl, wail, and squeal sometimes. Family groups yelping in unison can create the illusion of a dozen or more performing together.

Ryzik goes on to explain how the Utah Legislature has enacted what they call a “Predator Control incentive program” which ostensibly “curbs” coyotes while “safeguarding” mule deer, occasionally the prey of coyotes.

“Under the law,” Ryzik adds, “the state now pays civilians to hunt coyotes.”

From there, the Times dutifully glorifies an 18-year-old hunter “ably” shooting a coyote and “proudly” hauling “the carcass” to the office of an Orwellian nightmare known as the “Division of Wildlife Resource,” where “ears, jaws, scalps and nose-to-tail pelts were deposited in an iced-over flatbed.”

All this is done, they assure us, in an “orderly fashion” as the assassins are rewarded with $50 per coyote. In case any readers begin to feel squeamish, Ryzik is quick to remind us that coyotes are “considered a persistent menace.”

Corporate media message: Humans teach their children to shoot animals and then proudly trade in the body parts for cash -- but the “persistent menace” is the coyote.

Some of what they omitted: In order to not get detected by predators, sometimes coyotes walk on their toes to make as little noise as possible. The coyote is able to detect hunters coming from a mile away or even more. They have a very developed sense of smell, which is used for finding food and avoiding dangerous predators. They can even use their smell to spot prey scurrying beneath snow. The coyote can attain a running speed of 40 miles per hour and has great swimming skill.

Another contract killer who, we’re told, has been “hunting coyotes for 15 years,” is conveniently called upon for a quote about his targets being “vicious” and a “nuisance.” And why would this longtime murderer feel this way?

“I’ve seen them pull down animals,” he explained, as he cashed in the remains of eight coyotes.

And they say irony died on the day Kissinger was awarded a Nobel Peace Prize.

Having laid down enough evidence (sic) to allow most readers to confidently move on to the sports pages, Ryzik does have more for those who stick around: offering further details on the program, highlighting the need to “manage” the “damage” coyotes do, while reminding us that Utah residents “pride themselves on the state’s natural beauty, its wildlife, and the acumen of its hunters.”

Of course, no need to clarify that she was referring only to its human hunters.

Follow the Money
In the final one-third of the article, we learn the truth behind the demonization of the coyote. The aim of the bounty program, we’re told, is “to protect the mule deer, a symbol of Utah.”

By “protect,” of course, they mean “eliminate the competition” as mule deer are a “favorite” prey of Utah’s human hunters.

And before you think the state really gives a shit about any down-on-his-luck resident desperate enough to hunt down a sentient being for $50, here comes Big Truth #1:

Utah Gov. Gary R. Herbert, a Republican, signed the program bill last March at “a shop that manufactures hunting bows, as a way to emphasize the $2.3 billion that hunting and wildlife appreciation bring to the state economy.” (emphasis added)

This is quickly followed up with Big (and inconvenient) Truth #2:

“A six-year study published in 2011 found that coyote removal did not effectively increase the mule deer population in neighboring southeastern Idaho.”

“The argument that coyotes have much impact on mule deer populations is speculative,” Mark Clemens, manager of the Utah chapter of the Sierra Club, told the Times.

Yet, all this pales in comparison to Big Truth #3:

Fight for Your Right to Slaughter
Buried within the last portion of the article, the aforementioned Sierra Club manager, Mark Clemens finally exposes the context we truly need to understand why murdering coyotes is being justified by the newspaper of record: The bounty bill, he explains, is “mainly about protecting livestock owners.”

Give that boy a prize.

“Ranchers are keen to swap stories of coyotes taking out an entire herd of young sheep or cattle, and some have complained to legislators about coyote attacks,” writes Ryzik, piling on the rhetoric or rationalization.

Reminder: “Taking out an entire herd of young sheep or cattle” is solely the domain of human predators.

The equation is simple: Coyotes must be portrayed as “sly” and “vicious” and a “menace” because they may kill (for survival) a few of the animals humans own (sic) and breed and confine and genetically modify and pump full of drugs and torture and then brutally slaughter -- and all of that is big, BIG business.

Not that you’d ever learn it from the corporate media but all that is also the cause of oppressed human workers, a holocaust of preventable human diseases, more profits and more control for the 1%, and irreversible environmental devastation.

All that is also the #1 source of human-created greenhouse gases -- but coyotes, wow… they sure are a nuisance, huh?

Shift happens
In a moment of temporary lucidity, Times journalist (sic) Melena Ryzik seemingly bemoans the fact that “the incongruity of killing one animal to spare another, only to kill the second animal for sport (or food), is not recognized here.”

Well, she can take a bow for a job well done, but the good news is that more and more aware humans are recognizing this incongruity. So, in the name of expediting that awakening, please allow me to yet again repeat the two steps I’ve offered in my last couple of articles:

If these modifications sound unlikely or even impossible to you: Try tapping into your vast imagination, seeing past the limited choices we’ve been programmed to accept, and choosing to view such adaptations as not only eminently feasible but also as undeniably necessary.

Surrender the privilege of speciesism, embrace empathy for all sentient beings, and allow compassion to guide your choices.