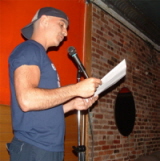 "You don't stick a knife in a man's back nine inches, and then pull it out six inches, and say you're making progress." --Malcolm X

Another Election Day approaches and I’m reminded of something the late Pakistani dissident, Eqbal Ahmad said about Noam Chomsky in the book, Confronting Empire (2000): “He (Chomsky) has never wavered. He has never fallen into the trap of saying, ‘Clinton will do better.’ Or ‘Nixon was bad but Carter at least had a human rights presidency.’ There is a consistency of substance, of posture, of outlook in his work.”

But along came 2004... when Chomsky said stuff like this: “Anyone who says ‘I don’t care if Bush gets elected’ is basically telling poor and working people in the country, ‘I don’t care if your lives are destroyed’.” And like this: "Despite the limited differences [between Bush and Kerry] both domestically and internationally, there are differences. In a system of immense power, small differences can translate into large outcomes."

Standing alongside Chomsky was Howard Zinn, saying stuff like this: "Kerry, if he will stop being cautious, can create an excitement that will carry him into the White House and, more important, change the course of the nation."

Fast forward to 2008 and Chomsky sez: “I would suggest voting against McCain, which means voting for Obama without illusions.” And once again, Howard Zinn is in agreement: “Even though Obama does not represent any fundamental change, he creates an opening for a possibility of change.” (Two word rejoinder: Bill Clinton)

This strategy of choosing an alleged “lesser evil” because he/she might be influenced by some mythical “popular movement” would be naïve if put forth by a high school student. Professors Chomsky and Zinn know better. If it’s incremental change they want, why not encourage their many readers to vote for Ralph Nader or Cynthia McKinney? The classic (read: absurd) reply to that question is: “Because Nader or McKinney can’t win.”

Of course they can’t win if everyone who claims to agree with them inexplicably votes for Obama instead. Paging Alice: You’re wanted down the goddamned rabbit hole.

The “poor and working people in the country” that Chomsky mentions above are paying ZERO attention to him or anyone like him... and that’s a much bigger issue than which millionaire war criminal gets to play figurehead for the empire over the next four years.

Zinn talks about Obama and the “possibility of change.” It seems odd to be asking this of an octogenarian but: Exactly how much time do you think we have?

Every twenty-four hours, thirteen million tons toxic chemicals are released across the globe; 200,000 acres of rainforest are destroyed; more than one hundred plant or animal species go extinct; and 45,000 humans (mostly children) starve to death. Each day, 29,158 children under the age of five die from mostly preventable causes.

As Gandhi once asked: “What difference does it make to the dead, the orphans and the homeless, whether the mad destruction is wrought under the name of totalitarianism or the holy name of liberty or democracy?”

I promise you this: The human beings (and all living things) that come after us won’t care whether we voted for Obama or McCain in 2008… if they have no clean air to breathe, no clean water to use, and are stuck on a toxic, uninhabitable planet. They’d probably just want to ask us this: Why did you stand by and let everything be consumed or poisoned or destroyed?

Conclusion: A vote for either John McCain or Barack Obama is -- at best -- an act of criminal negligence.

Mickey Z. is the author of two new books, CPR for Dummies and No Innocent Bystanders, and can be found on the Web here.