Until recently, yellow cabs were a major part of the NYC experience. Thanks to Uber, Lyft, and the pandemic, however, the once-iconic vehicle may be running red lights on its way toward extinction.

Even so, taxi rides have barely factored ever into this native New Yorker’s life. At times, I owned a car but mostly, I still walk or use public transportation. The extra cost of hailing a cab has never really been an option for me. But that doesn’t mean I don’t have some taxi-related stories… 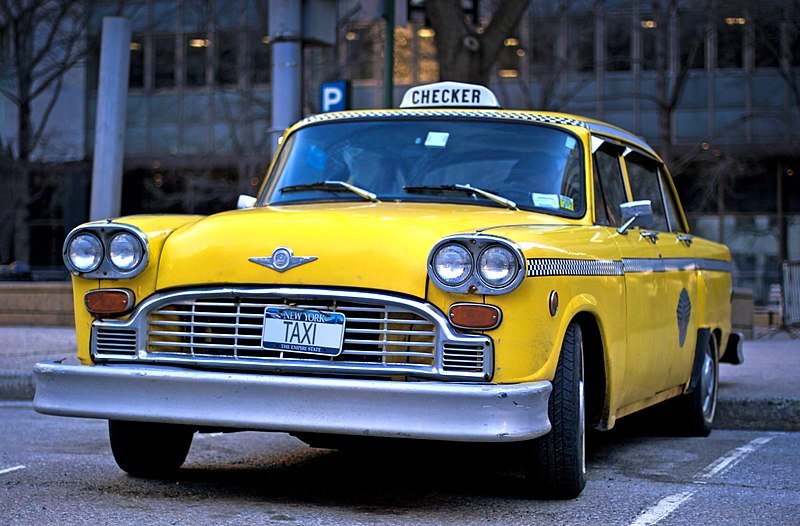 There was a taxi depot in my old neighborhood. Its water fountain and super cheap vending machines came in handy for me and my delinquent friends in between either athletic events or mischief. I remember one evening in particular. After we stopped in the taxi hub for some water, we began walking back to the local schoolyard as a cab cruised past us. It was driven by a big man with a mean, scarred face. His head was shaved and that was not yet a thing back then.

For some inexplicable reason, my friend Robby pointed at the man and bellowed: “Yes, you are ugly!”

The cab driver’s eyes widened with rage and he took off after us: driving backward down the street. We were seasoned pros with an internal map for such situations. We scurried up and down blocks, over fences, through yards, and even across a roof or two — but this guy was good. He stayed on our tails much longer than anyone who had ever chased us… including the cops.

Thinking we had finally ditched him, we ducked back into the depot for a water break. As we sat catching our breath and wiping our brows, the bald man suddenly burst into the room.

“You punks better watch who you mess with,” he yelled. We stayed frozen in our chairs as he bawled us out for about five straight minutes. At times, it seemed like he might physically attack us, but his wrath subsided and he left. After he was gone, another of the cab drivers offered us this superfluous advice: “You better not mess with that guy. He’s crazy, really crazy.” 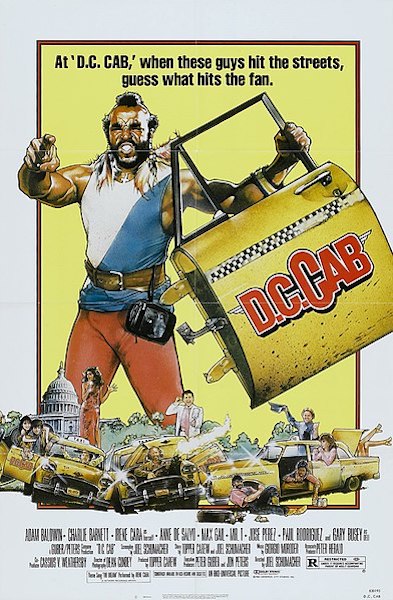 From that point on, taxi cabs mostly came into play for me as moving targets — for eggs on Halloween, for snowballs during winter. I do recall my friend Sal cooking up a plot one October 31. I was not party to this, but I did witness it.

Even though it was a time-honored tradition for kids to throw eggs at cabs, the drivers never learned. Every time, they’d slam on their brakes, abandon their yellow jalopies, and fruitlessly give chase — leaving vehicles vulnerable.

Sal decided to cash in on this phenomenon. He had a bunch of the younger kids blast a passing taxi with eggs. When the cabbie predictably stopped and got out to chase them, Sal ran over to the cab and stole his money (an old school coin dispenser).

Several years later, I got a different perspective of taxis and their drivers when I was employed by the Port Authority. It was a summer job that had me picking up garbage at LaGuardia Airport. Yeah, I was one of those hapless souls — carrying a red canvas bag and a long pole with a pointy jabber at the end to stab whatever debris I encountered.

To deal with this job, I had an astounding number of scams to get over and not actually do much work. Ultimately, I fell into a smooth routine that helped me get through this summer ordeal without breaking too much of a sweat. Every morning, I’d report to work, climb into a giant yellow Port Authority bus, and get myself driven to my very own workstation conveniently located on the outer reaches of the airport.

Once there, I’d stroll around and do some negligible cleaning before making a beeline for the old Eastern Shuttle building (which soon became the Trump Shuttle and I think it’s the American Airlines Shuttle today). After hiding my conspicuous stick and bag, I’d buy a couple of newspapers and enter the cafeteria to partake in breakfast. The next part of my diabolically uncomplicated contrivance was to select a cafeteria table that effectively concealed my whereabouts.

After some trial and error, I was able to identify the ideal table. It was strategically located near a particularly enormous column. When anyone entered the cafeteria, the only way they’d see me was if they walked into the joint about twenty feet and specifically peered around the column to look. So, I’d consume my meal and read my newspapers to get my daily dose of corporate propaganda. More often than not, I’d lay my overloaded head on the table like a nursery school student and take a nap. 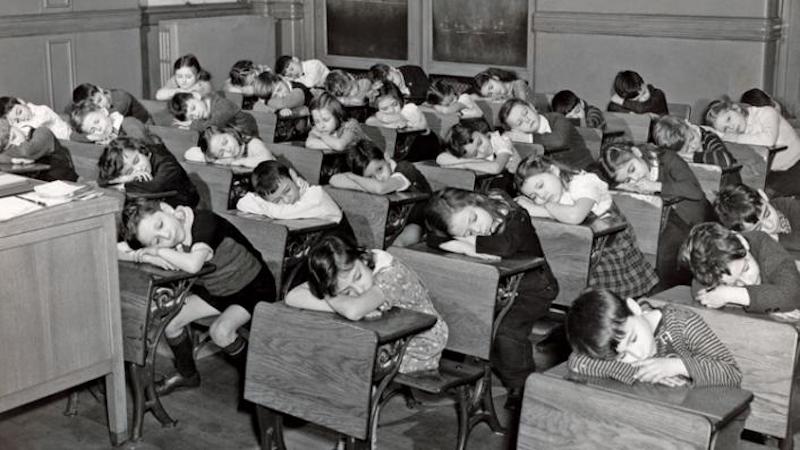 At noon, I’d awake, stagger out in the summer sun, find my stick and bag, and catch the yellow bus back to the main office where I could punch out for lunch. Since I lived conveniently close to the airport, I’d drive home (still a motorist back then) to feast on a homemade lunch and wish my Mom luck as she’d leave to go take care of my grandfather for the afternoon.

After stuffing my face, I’d set my alarm for 2:30 p.m. and fall soundly asleep for the next two hours. When that alarm would ring, I’d scurry out to my car and drive back into the employee parking lot to wait for the yellow bus to bring back those of my co-workers who actually earned their pay each day.

As the bus emptied, I’d slip out of my car, mingle with the exhausted workers, dump my gear in my locker, and punch out for the day. This scam lasted for a little more than two months. My bosses knew I was screwing them but they just couldn’t ascertain how.

One of them looked me in the eye and said, “I know you’re running a scheme and I’m gonna figure it out.” I smiled and assured him I had absolutely no idea what he was talking about.

You may be wondering what made this gig so intolerable as to warrant such an elaborate scheme. Answer: Cleaning up after the taxi drivers.

Near the old Eastern Shuttle, there was a massive taxi stand where the drivers could park their yellow death machines and wait like covetous vultures for the planes to land so they could prey on gullible tourists.

It was taxis as far as the eye could see — combined with the stench of junk food and urine. As I strolled around, pretending to pick up their toxic refuse, I’d observe the cabbies in action like a modern-day Margaret Mead. Almost to a man, the cabbies dined on unhealthy, malodorous food. Despite the portable bathroom set-up LaGuardia Airport provided for the drivers, the men would casually get out of their cab, unzip their pants, and simply whip it out to take a piss in public.

The sight of a cabbie shaking himself dry before hastily using the same hand to shovel a jelly donut into his mouth (making sure to lick the powdered sugar from those fingers) is not something anyone should be subjected to on a regular basis. Doesn’t the Constitution protect me from cruel and unusual punishment?

Anyway, the worst part of all (yes, it actually gets worse) was the aforementioned bathroom set-up. It was two porta-potties lined up in a little cul-de-sac near the taxi waiting area. Once the booths got slightly dirty, some of the cabbies would start relieving themselves outside of them — in public — on a pile of old newspapers.

Now, don’t get me wrong, the idea of literally taking a dump on the New York Post has more than its share of merits, but this was not a political statement, my friends. Not by a long shot. Then, the next taxi driver to come along would impassively add to the growing rankness with his own Burger King-inspired bowel movement. This went on all day and night.

Needless to say, yours truly never went anywhere near this Superfund Site. I almost ended up in a fistfight with my boss when he demanded that I clean the “shithouse,” as he called it. This was the same guy who swore he’d figure out my scam.

Boss Man got loud with me about the shithouse once — once — in front of cabbies and passengers and I let my razor tongue loose. Fortunately, my reputation as a martial artist amongst my co-workers preceded me, and that Port Authority lifer chose discretion over valor.

He eventually got retribution by re-assigning me to the George Washington Bridge to become a toll collector. I quit that gig after a week. No way was I going to inhale exhaust fumes for eight hours a day, five days a week. I get enough of that as a born-and-raised New Yorker.