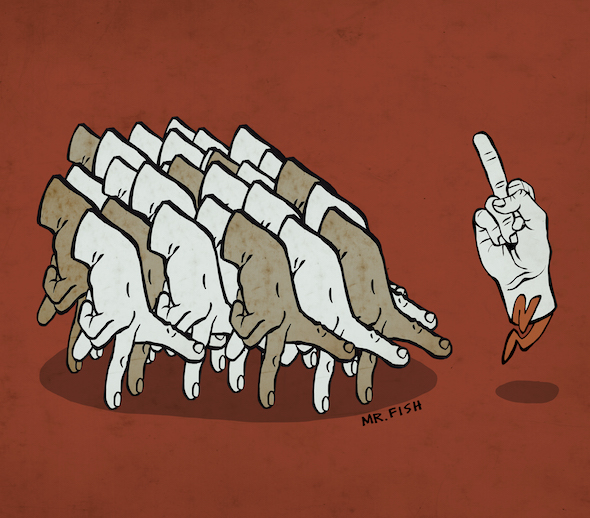 Jan. 15, 2017 (Truthdig) -- Politics is a game of fear. Those who do not have the ability to make power elites afraid do not succeed.

All of the movements that opened up the democratic space in America -- the abolitionists, the suffragists, the labor movement, the communists, the socialists, the anarchists and the civil rights movement -- developed a critical mass and militancy that forced the centers of power to respond. The platitudes about justice, equality and democracy are just that. Only when power becomes worried about its survival does it react. Appealing to its better nature is useless. It doesn’t have one.

We once had within our capitalist democracy liberal institutions -- the press, labor unions, third political parties, civic and church groups, public broadcasting, well-funded public universities and a liberal wing of the Democratic Party -- that were capable of responding to outside pressure from movements. They did so imperfectly. They provided only enough reforms to save the capitalist system from widespread unrest or, with the breakdown of capitalism in the 1930s, from revolution. They never addressed white supremacy and institutional racism or the cruelty that is endemic to capitalism. But they had the ability to address and ameliorate the suffering of working men and women.

These liberal institutions -- I spend 248 pages in my book “Death of the Liberal Class”  explaining how this happened -- collapsed under sustained assault during the past 40 years of corporate power. They exist now only in name. They are props in the democratic facade. Liberal nonprofits, from MoveOn to the Sierra Club, are no better. They are pathetic appendages to the Democratic Party. And the Democratic Party, as the community organizer Michael Gecan said, is not a functioning political party but “a permanent mobilization.” It is propped up with corporate money and by a hyperventilating media machine. It practices political coronations and manipulates voters, who have no real say in party politics. There are, as the political philosopher Sheldon Wolin reminded us, no institutions left in America that can authentically be called democratic.

But, even more ominously, the militant movements that were the real engines of democratic change have been obliterated by the multi-pronged assault of communist witch hunts and McCarthyism, along with deindustrialization, a slew of anti-labor laws and deregulation, and corporate seizure of our public and private institutions. This has left us nearly defenseless.

The corporate state ignores the suffering of the majority of Americans. It rams through policies that make the suffering worse. This is about to get turbocharged under Donald Trump. Institutions, the courts among them, that once were able to check the excesses of power are slavish subsidiaries of corporate power. And the most prescient critics of corporate power -- Noam Chomsky, Ralph Nader and others -- have been blacklisted and locked out by corporate media, including a public broadcasting system that depends on corporate money.

We will have to build movements and, most importantly, new, parallel institutions that challenge the hegemony of corporate power. It will not be easy. It will take time. We must not accept foundation money and grants from established institutions that seek to curtail the radical process of reconstituting society. Trusting in the system, and especially the Democratic Party, to carry out reform and wrest back our democracy ensures our enslavement.

“We think the issues are, in a sense, the easy part,” said Gecan, who is the co-director of the Industrial Areas Foundation, the largest network of community-based organizations in the United States. He is also the author of “Going Public: An Organizer’s Guide to Citizen Action.” “When we go to a place like East Brooklyn, or South Bronx, or the west side of Chicago, you can take a ride around the neighborhood and see many of the issues right up front. What we can’t see is -- is there a fabric of relationships among institutions and leaders in those areas? We spend the first year, or two, or three, building that. Identifying leaders. Identifying institutions that are actually grounded in those communities. Doing training with leaders. Raising money so that the organization doesn’t run out of money right at the start.”

“We don’t take government money,” he said. “We want independence. We want ownership. We want people to have skin in the game. We want people to be able to walk away from any situation they want to, to confront anyone they want to, without worrying about having their budget being slashed or eliminated. So we stress both. Organized people and organized money is essentially building the foundation of the organization first. And then, once that’s fairly solid, we begin identifying issues through a real, deliberate process of house meetings, individual meetings, soliciting to people. And not just doing a poll in the community. [We find out] what do you care about? What are you concerned about? By asking people what they are concerned about and are they willing to do something about it.”

This process of institution building permits organizers and activists to eventually pit power against power.