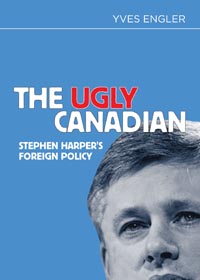 Some of the topics have been covered before by Engler, others are new, but for both the emphasis is on how all the policies advocated fit under the rubric of foreign policy, a “militaristic and corporate oriented” set of policies. As could be expected from a foreign policy that mimics and in some cases betters that of the United States, there has been “an unprecedented international backlash against Canadian foreign policy.”

The was quite obvious at the recent convocation of the UN heads of state, where Canada was posted to speak on the last day, with Foreign Affairs Minister John Baird speaking to an almost empty assembly room, substituting for Stephen Harper who absented himself in order to receive a commendation from an independent right wing Judeo-Christian organization.

Recognizing that not many Canadians in Canada truly know the who, what, where, how and why of Canadian policy, Engler’s goal is to “be a small spark in lighting a fire of interest in Canadian foreign policy,” not an easy task with the complacency of the Canadian public towards ideas that might disturb their comfortable place in life.

His first topic is “Tar Sands Diplomacy.” While this has created strong internal disputes between environmentalists, indigenous peoples and politicians and corporate powers, it also has a large impact on Canada’s role vis a vis climate change, global warming, U.S. energy supplies, and China’s growing energy demands. Environmentalists have become “radicals’ and “extremists,” accused of accepting foreign funds and influence in order to counter the government’s position; this stands in contrast to the hundreds of millions of dollars the international corporations have put into buying the politicians and green-washing their position.

Engler’s main point with foreign policy is the amount of time that ambassadors and other political lobbyists spend to argue in favour of Canada’s development of the tar sands, concluding with “It turns out Canada’s diplomats are really on the frontline of advocacy for dirty oil.”

In a previous work, The Black Book of Canadian Foreign Policy Engler outlines the practices and habits of the Canadian mining sector and its government support. In this current presentation, he highlights the governments financial support for the many mining corporations headquartered in Canada, and the political support for their adventures in other countries. Relating information from the Congo -- “The most egregious” example -- Afghanistan, Mongolia, and most of Latin America, the emphasis once again is on how Canadian politicians abroad support Canada’s mining interests against the environmental/cultural/economic interests of the foreign country.

Under this title, Engler highlights how Canada has been very similar to the U.S. position, discussing Canada’s reaction to events in Tunisia, Egypt, Bahrain, Kuwait, Libya (where Canada played a prominent role in bombing infrastructure and personnel targets), Syria, and Saudi Arabia -- the latter which “demonstrates the absurdity…of Harper’s claim that “we are taking strong principled positions in our dealings with other nations, whether popular or not.”

Popular attitudes at home and abroad “are irrelevant to the Conservatives ... demonstrat[ing] the Conservatives’ utter contempt for the democratic will of ordinary people across the Arab world.”

As for Libya, a full chapter is devoted to this war torn country where the special forces, the air force, and the navy each had an operational role. Using the now common arguments about genocide and civilian protection, emphasizing it with accepted lies about mass rape, the Canadian government helped overturn Gaddafi’s rule, followed by an immediate introduction of diplomats looking for corporate profits in the oil sector. As summarized, for Canada, “War and profit have always marched together.”

Best Friend of the Israeli Right

In another earlier work, Building Apartheid, Engler presents Canada’s history of support for the Zionist cause and the Israeli government. Canada’s historic British imperial perspective (now being revived by Harper) plus the general trend of the government personnel supporting the Millennial right wing aspects of Christianity, have combined to create Canada’s current foreign policy. While reprising that information, more information is added concerning the military-economic-security ties that stand between the two countries establishment elites. Domestically, criticism of Israel/support of Palestinians is viewed as extremism and “repeatedly equated criticism of Israel with racism towards Jews.” Ultimately, Canada’s principled position is “Israel can do no wrong.”

Following on these views, “War with Lebanon and Iran” highlights how Canada’s foreign policy towards Lebanon and Iran are fully in line with Israeli interests regardless of international and humanitarian law.

Under the Conservatives, Canada has been promoting itself as an active military player on the global scene, both for domestic consumption at home, and -- perhaps more awkwardly -- to be seen as a tough, no nonsense, military player within world events. Domestically this is visible through military presentations to the “heroes” of Libya in the House of Parliament, the celebrations concerning Canada’s great victory in the War of 1812 over the United States, the inclusion of military ‘entertainment’ at sports and other events along with other “support the troops“ events, and the many exhortations about Canada taking a “principled stand” on world affairs.

Essentially Canada is preparing for future wars, both diplomatically and economically. Canada’s military corporations receive strong funding from the Federal government as well as the diplomatic support abroad to find markets for the growing armaments sector of industry. Engler’s summary concern is about Eisenhower’s “military industrial complex” growing “to the point where democracy is imperiled.” Democracy is already imperilled in Canada; fortunately for the world, Canada is a small nation with a big mouth, a bullying attitude; unfortunately at the same time, it acts in coordination with U.S./NATO/EU military interests.

The “Consequences of Militarism” are covered in a following chapter, ending with the summation:

How can you tell when the Canadian military and their supporter are lying about a war? When they know a reporter is present.

The book returns to “Business Above All Else” with the first subsection on “Stopping Social Chang in Latin America.” This ties in with the previously mentioned mining interests but also with Canada’s alignment with U.S. foreign policy, as in the example where “the Harper government’s attacks against Venezuela were part of a campaign to support Latin America’s U.S.-backed business class,” with secondary goals of Bolivia’s free trade agreement being to “bolster that country’s right wing government against its Venezuelan neighbour.” The next subsections discuss Canada’s rhetoric on Neoliberalism, and the Rotterdam Conventions, the latter looking at Canada’s asbestos industry (recently halted, surmised to be a political move with respect to the election of a sovereigntist government in the province of Quebec).

Returning to Canada’s role of intervening in other countries, Engler looks at its involvement in Somalia and Haiti, and its “contradictory and confusing” role towards China. For Haiti, the beleaguered Caribbean country, Canada provided a military presence, while not sending well resourced and trained rescue teams. Most of Canada’s aid money went towards “strengthening the repressive arm of the Haitian state. Moral implications be damned.”

In his conclusions, Engler uses the Foreign Affairs Office of Religious Freedom as an example of their right wing foreign policy. The office has nothing to do with true religious freedom, but is a cover to support Christian apocalyptic viewpoints, as “The Conservatives are closest to the fundamentalist evangelical organizations and Harper himself is a member of the Christian and Missionary Alliance church.” Domestically, the government has recently laid off all the non-Christian ministries that were working within the prison system as support for rehabilitating prisoners.

As for winning elections, the Conservatives recognize that in general, without calls to jingoistic patriotism and creation of the fear of the ‘other’, “conservative parties rarely win elections.” Which really means that “governments completely supplicant to big business must provide the working class majority with a reason to vote against their own material interests.”

The growing belligerence of Canada’s foreign policy is essentially a combination of right wing religious rhetoric and neoliberal economic policies, both of which have been shown to be detrimental to the environment and other cultures of the world. For a compact and informative source on Canada’s role in this neoliberal religious militaristic environment, The Ugly Canadian is a great resource book.

Jim Miles is a Canadian educator and a regular contributor/columnist of opinion pieces and book reviews for The Palestine Chronicle. Miles' work is also presented globally through other alternative websites and news