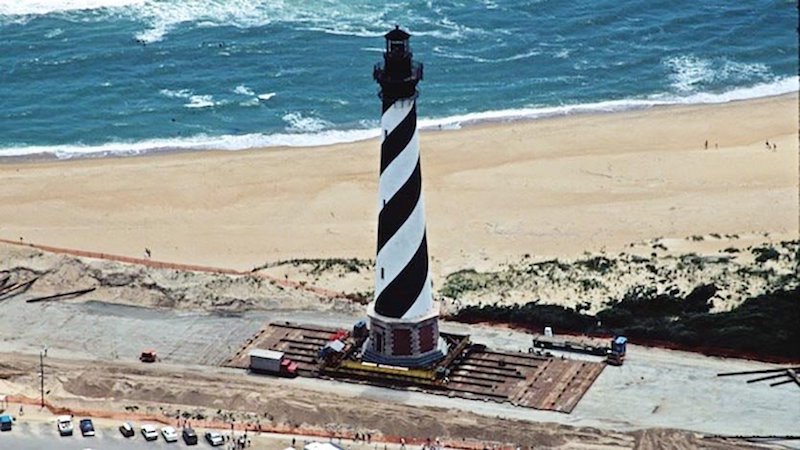 Above: An excellent example of a well-managed strategic retreat from the coast occurred in 1999 when the Cape Hatteras Lighthouse on North Carolina’s Outer Banks was moved 2,900 feet back from an eroding shoreline, a move that cost $12 million. When completed in 1870, the Cape Hatteras lighthouse had been located a safe 1,500 feet inland from the ocean, but natural barrier island erosion processes, augmented by rising seas and storm-driven tides, had reduced this distance to just 120 feet by 1999. Locals were strongly opposed to the move, believing it would harm the tourist industry. Ironically, the lighthouse is now more of a tourist attraction than ever. On the Outer Banks of North Carolina, the regional slope of the land is 1 to 10,000, which means in theory that a 1-foot rise in sea level could move the shoreline about 2 miles. Thus, the lighthouse will likely have to be moved again later this century. Image credit: National Park Service.

Feb. 16, 2018 (Weather Underground) -- The only answer to rising seas is to retreat, argue Duke University sea level rise expert Dr. Orrin Pilkey and co-authors in their excellent 2016 book, Retreat From a Rising Sea: Hard Choices in an Age of Climate Change.

The book provides an excellent overview of how fast sea level is rising, the vulnerability of coastal cities to sea level rise in both the United States and worldwide, the failed government policies that subsidize the wealthy and encourage high-risk development near eroding shores, and the well-funded PR campaign by the fossil fuel industry to keep us from recognizing the problem.

“Like it or not, we will retreat from most of the world’s non-urban shorelines in the not very distant future. Our retreat options can be characterized as either difficult or catastrophic. We can plan now and retreat in a strategic and calculated fashion, or we can worry about it later and retreat in tactical disarray in response to devastating storms. In other words, we can walk away methodically, or we can flee in panic.” 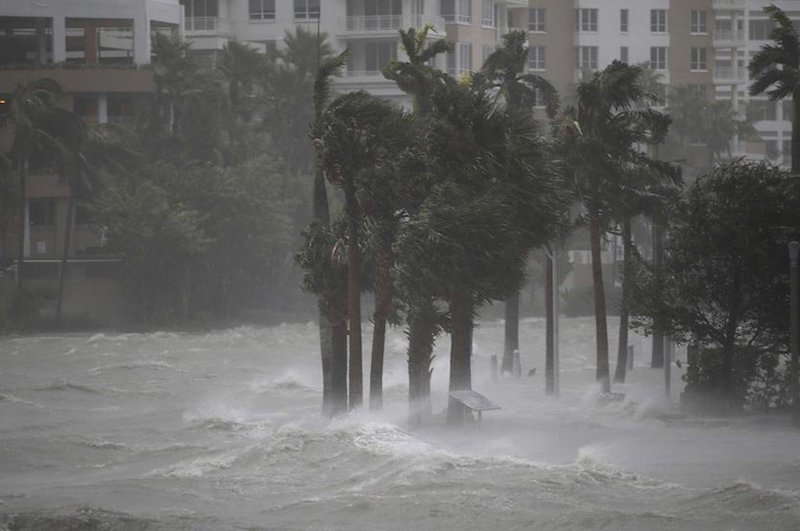 Figure 1. Water flows out of the Miami River to flood a walkway as Hurricane Irma passes through on September 10, 2017 in Miami, Florida. Image credit: Joe Raedle/Getty Images.

Miami and New Orleans are doomed

In a chapter titled, “The Fate of Two Doomed Cities”, the authors argue that “the survival of Miami and New Orleans beyond the 21st century is in serious doubt”, due to sea level rise:

“Miami will probably be doomed when the sea has risen two more feet. There is no nearby high ground to move buildings to; seawalls and the like won’t work [due to the porous bedrock that allows seawater to filter through]; and city and state leaders haven’t even agreed that there is a problem, much less started planning how to respond to the coming flood. Making a response all the more difficult, Miami’s demise will be slow and gradual; death from a thousand cuts.

The demise of New Orleans, however, will be either one big catastrophe or a series of catastrophes -- that is, big storms. The potential for extreme damage from storms increases every year as the sea level rises.”