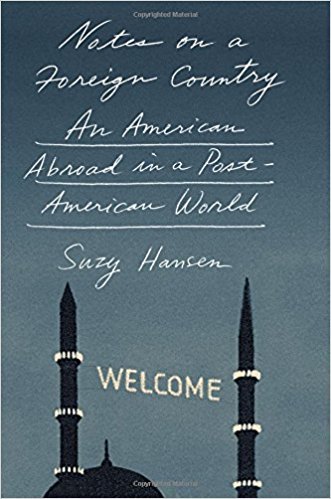 I don’t very often publish book reviews but, in this case, I believe this book to be of great value to anyone trying to make sense of where our country is going.

Review – Notes On A Foreign Country

The sub-title of Suzy Hansen’s “Notes On A Foreign Country” is “An American Abroad in a Post-American World” and that is the story in a nut-shell. Having worked abroad myself for several years I was eager to read what someone else had to say about the experience. What I encountered forced me to look back on my time working in Eastern Europe and I didn’t like what I saw. Ms. Hansen is unrelenting in her pursuit of the truth and the clarity of her demeanor and expectations. In short, both she and I and no doubt many others, prima fascia, take American superiority in all matters for granted except perhaps cuisine.

Hansen moved herself to Turkey to experience living full-time in a foreign country following the September 11th, 2001, attacks. She was then writing for the New York Times Magazine and decided to move to a Muslim-populated country to better understand the culture of the Middle East. That country was Turkey. While residing in Turkey she traveled extensively to other countries in that part of the world: Greece, Egypt, Afghanistan, Iraq, and Iran. She came, by virtue of her travels and unrelenting introspection, to a better understanding of herself and the United States. What she saw clearly were the assumptions many of us make as Americans working and living abroad.

The first challenge that came to mind for this reader is the belief that the United States leads the world in technology, education, military strength, social equity, and in other respects. It came as a great revelation to Ms. Hansen that others do not perceive us that way. What she learned is that the influence and reputation of this country are in decline if not bottomed out.

One has only to consider the ongoing futility of our military campaigns in Iraq and Afghanistan to appreciate that assessment. And, not only futility but the mind-boggling waste of American lives and national treasure in ventures that have no realistic purpose or definable conclusion. How, for example, can we consider ourselves superior as a society when ours is virtually the only industrialized free market country in the world that does not provide universal free healthcare?

Hansen’s descriptions of place and people are vivid and intelligent as are her reflections on herself as an actor in a world different from how she was raised and educated. She discovers the disillusionment with the United States of people in the places she visits. She sees how Americans are generally fully convinced of their' and their country’s superiority as they fail to understand and respect other countries, their people, and their customs. This attitude engenders resentment and a closing down that stands in the way of meeting as equals. We are international missionaries for our lifestyle, our mores, and our technology. We take our values to those whose own values and methodologies are presumed to be inferior to ours.

All of this brought to mind a Polish aphorism, “Koniec nie vidac!” The end is not seen, cannot be seen. We must wonder if perhaps that is the idea, the ultimate purpose, that there be no end to the pursuit of wars around the globe, they are just too profitable to end. And, as we wonder, you may rest assured that others in other countries are thinking the same thoughts.

This is a personal book well written and valuable. This is also an important book with which to disabuse yourself of U.S. Power, popularity, and influence in a world now made crazy and unstable in the “Time of Trump” who himself probably could not find a majority of the involved countries on a map.I recommend it highly if, for no other reason, than for perspective on this country. My hat is off to Ms. Hansen who now makes her home in Turkey.

NOTES ON A FOREIGN COUNTRY

An American Abroad in a Post-American World 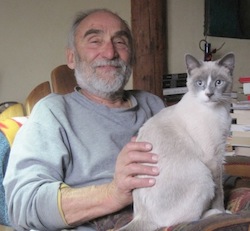 Genius cat Sheba with Emanuele Corso, looking like "an old Sicilian."Emanuele Corso’s essays on politics, education, and the social contract have been published at  NMPolitics, Light of New Mexico, Grassroots Press, Nation of Change, World News Trust and his own: siteseven.net. He taught Schools and Society at the University of Wisconsin-Madison where he took his PhD. His BS was in Mathematics. He is a veteran of the U.S. Air Force’s Strategic Air Command where he served as a Combat Crew Officer during the Cuban Missile Crisis. He has been a member of both the Carpenters and Joiners and IATSE (theatrical) labor unions and is retired from IATSE. He is presently working on a book: Belief Systems and the Social Contract. He can be reached at This email address is being protected from spambots. You need JavaScript enabled to view it.