BOOKS: 'Love in the Time of Dinosaurs' An interview with author Kirsten Alene (Mickey Z.) 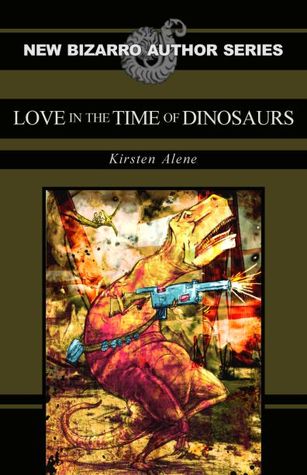 Feb. 2, 2011 -- Dinosaurs and insightful writers... or am I being redundant? Well, I'm happy to say reports of their mutual demise have been greatly exaggerated. Case in point: Love in the Time of Dinosaurs by Kirsten Alene.

The Portland, Oregon resident is the author of Chiaroscuro (2009), a poetry chapbook and "several stories and poems currently circulating the worldwide web." Most recently, she's penned the above-mentioned Love in the Time of Dinosaurs, a novella from Eraserhead Press, that's been said to portray "a world filled with complex politics, spirituality, history, and a sense of actual existence in some parallel dimension."

As I dug into Alene's novella, I was at the ready for metaphors, allusions, and other buried treasures within the Bizarro context. After just one chapter, I was too busy getting attached to the characters, plot, and pace to analyze. That could wait for the ensuing interview… which went a little something like this:

Mickey Z.: Extinct creatures have returned to wreak havoc using modern weapons. Seemingly pious monks are trapped by long-obsolete paradigms. Limbs and other body parts haphazardly reattached and reanimated with help of magical kung fu. Forbidden love. And so much more. Can you provide a roadmap of sorts through the metaphors and meanings?

Kirsten Alene: All summed up in those words, I would say the only roadmap is that I was very recently a teenager. I will try to say this without being poetic but, to be young is to be at war with the world, isolated, estranged, in conflict internally and externally, and dying all of the time just to be sewn back together again by people you don't really like. That's where that could probably came from. When I was writing it I was just thinking that dinosaurs with guns are fucking awesome. The plastic guns were inspired by a character in Cameron Pierce's Shark Hunting in Paradise Garden who has something like the Midas Touch only he turns things into mannequins.

MZ: It feels to me that you're still at war -- not with the world but with those fucking up the world, those using all kinds of new weapons to create all kinds of new extinctions. Yet at the root of the story is star-crossed love, growing and thriving amidst all the sliced off limbs.

KA: Well... I'm getting married in eight days, so there had better be some epic romance in there. I've been in the love-y mode. Maybe my next book will be less obvious on that front.

MZ: I’ve written: “All you need is love... and a small, well-trained army.” Looks like you might agree?

KA: And some chickens and a goat. And also two or three solar panels and a large plot of land. And corn. Other than that -- yes.

MZ: Can you walk us through the process that brought you to not only becoming a writer but a writer of Bizarro fiction?

KA: When I was seven (soon after winning a school poetry contest with a touching prose poem entitled "I Opened My Eyes"), I told my grandfather I was going to be a writer when I grew up. He told me that was fine, but that I would need to get a real job. I decided to be an English professor. For practice, I read every book on the Harvard Classics Library bookshelf and preached obnoxiously to my three younger siblings. But despite my classical literature obsessions, I've always written weird, disjointed fiction where a lot of people die and get eaten by monsters. I started talking to Cameron Pierce a year ago and he directed me to a free download of Andersen Prunty's Zerostrata. It was exactly the kind of thing I wanted to write. It made me angry that someone else had written it. I read a bunch of Bizarro really quickly after that and Love in the Time of Dinosaurs erupted out of my brain.

MZ: Was the book’s relatively short length by design?

KA: I felt like it was a story that needed to be told relatively quickly and without any nonsense. (My goal was 20,000 words and it ended up being about 19,000.) I am a huge fan of short novels. There is beauty in brevity.

MZ: Any advice for wanna-be writers?

KA: About writing: write all the time and be published everywhere. Short stories, news articles, poems, horoscopes, it doesn't matter.About editors: be gracious and not afraid of compromise. No story is ever complete when the author finishes writing it. Most editors know what they're talking about, even if you're 55 and they're 22.About books: people have told me over and over, and I have discovered myself that no one can ever do more for your book than you can. Agents, publishers, editors... no one is going to promote your book as well as you.

MZ: William Burroughs once said that artists were the true architects of change. What would you like readers to take away from reading Love in the Time of Dinosaurs? What change might your work inspire?

KA: I think the only thing I (and this book) want to tell people is that they should love one another and themselves. That sounds a bit lame. But it's the only thing worth telling people. This book doesn't have a message -- but I think every time love sneaks into a conversation or a story and changes someone, it's a little triumph for people.

Kirsten Alene is also the editor of the webzine Unicorn Knife Fight.

Until the laws are changed or the power runs out, Mickey Z. can be found on this crazy new website called Facebook.