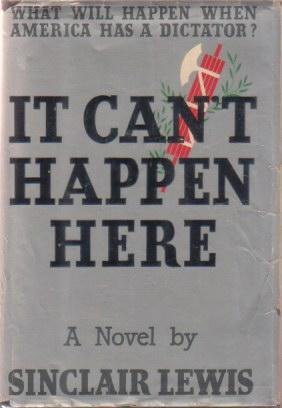 Yes it can happen here, and some would say it’s already happening.

Written in 1935, Sinclair Lewis’ prescient novel, “It Can’t Happen Here” tells what happens to a country when people are complacent and compliant. The novel is an allegory, a morality tale, a story depicting the unquenchable quest for renown, power, and oftentimes wealth in a “go along to get along” complacent society.

The story accords both with what is referred to as Big Man theory and Narcissistic Personality Disorder (NPD). The Big Man, often inflicted with NPD, dispenses favors, employment, and material gain to sycophants in return for loyalty and support. Maintaining the requisite plots and sub-plots requires a great deal of coercion and effort.

Lewis describes the pathology that infects both sides of the current Democrat/Republican equation as well as other organizations from local politics to labor unions. It’s a two way street. The “leader” generally requires obsequious feedback and loyalty and the followers require favors in return for their affirmation and adoration.

Everyone in the game has a handful of “gimme” and a mouthful of “much obliged.” It often doesn’t matter what the actors receive so long as they get “something”; a vote, a ride in a limo, a free meal, or simply an “atta boy” pat on the back. Such “leaders” possess an innate primal instinct to identify and exploit weaknesses that is crucial to their success.

As the antagonist, Berzelius Windrip, climbs his way to absolute power the protagonist, Doremus Jessup, whittles his life down to as low a profile as he can manage to avoid attention. Windrip, an ambition driven politician, eventually becomes the “President” surrounded by Yes Men and a vigilante posse, the CORPOs, who kill or jail anyone who opposes his and their rule.

Jessup, a small town newspaper editor eventually loses his paper and thus his soapbox. Life in the small Vermont town in which most of the action takes place is slowly but surely reduced to imprisonment or sniveling obeisance. Dissenters are jailed or outright murdered by the newly ascendant former underclass CORPOs. Eventually the tide envelops Jessup -- he is arrested and finds himself trying to escape into Canada.

The reader is encouraged to consider the following symptoms of Narcissistic Personality Disorder as described by the DSM-5 diagnostic text and to ask yourself if you recognize any of these in the current political milieu:

The obvious parallels are manifested in Windrip’s startling resemblance to two of the current candidates running for President of the United States and Jessup’s avuncular resemblance to a sidelined populist former candidate for President. Yes, history does indeed repeat itself as I vividly recall the turmoil of 1968 and the populist candidacy of Eugene McCarthy.

As you read this valuable prescient book I believe you’ll find yourself wondering if things ever actually change and what is our fate as a society if we cannot do better than this. Think of “It Can’t Happen Here” as an early warning call to action.

Emanuele Corso, "looking like an old Sicilian," with "genius cat" Sheba.Emanuele Corso’s essays on politics, education, and the social contract have been published at NMPolitics, Light of New Mexico, Grassroots Press, Nation of Change, WorldNewsTrust.com and his own website:siteseven.net. He taught Schools and Society at the University of Wisconsin-Madison where he took his PhD in Educational Policy Studies. His BS was in Mathematics. He is a veteran of the U.S. Air Force’s Strategic Air Command where he served as a Combat Crew Officer during the Cuban Missile Crisis. He has been a member of both the Carpenters, Joiners and IATSE (theatrical) labor unions and is retired from IATSE. He is presently working on a book: Belief Systems and the Social Contract.