BOOKS: Gaza in Crisis -- Reflections on Israel’s War Against the Palestinians. By Noam Chomsky and Ilan Pappe (Jim Miles) 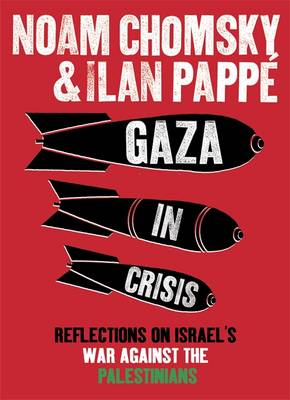 Feb. 16, 2011 (Palestine Chronicle) -- When two of the most informed academics in the world collaborate on a project, the reader expects to have clear information and insights into the topic at hand. Chomsky and Pappe provide just that with their new short work “Gaza in Crisis.” Focussed on Gaza, the discussion necessitates a background discussion on events that have brought about the current situation in Gaza.

The book starts with an earlier Chomsky interview highlighting possible outcomes of the Palestine situation, the use of boycott and divestment, and, as always, the important role that the U.S. plays in supporting Israel. The “crushing of the Palestinian and other violent crimes are possible only because the Untied States provides [Israel] with unprecedented economic, military, diplomatic and ideological support.”

That leads into a brief summary of U.S. involvement in the Palestine question, not in an historical date by date, event by event presentation (which is readily available in other works). Instead it highlights five positions, five general attitudes that have helped create today’s situation: Christian Zionism, the conversion from pro-Arabism to Zionism in view of the King-Crane commission; the creations and advancement of the pro-Israel lobby within the United States; the dominance of the five sisters (the big oil companies); and finally, the true nature of the peace process as it allows Israeli colonialism in Palestine.

The third chapter deals with the nakba, an essential background topic on any discussion on Palestine. Chomsky and Pappe focus, again, not on the historical events and a blow-by-blow account, but look at the broader picture and how it is utilized in context with overall Palestinian/Israeli relationships. The current peace negotiations focus on the 1967 "green line," the demarcation between what Israel conquered after the UN Partition plan was rejected. Part of the reason for highlighting the 1967 date is that for the Israelis it allows them to conceal the events of the nakba, the ethnic cleansing that occurred in many parts of the territory they conquered. This serves the "heroic" narrative that is part of the collective denial of the ethnic cleansing which occurred during the 1947-48 war (and continued well after). The stilted nature of the peace process is then limited to actions after 1967 -- mainly the settlement process and the subjugation of the now "enclaved" Palestinian people whereas otherwise it would necessarily include the ethnic cleansing of hundreds of Palestinian towns and the recognition of the internationally accepted right of return for persons displaced by war.

In following discussion on Israel violence towards Gaza, the United States plays a central role in all Israel actions. Whether supplying direct military aid, testing new weapons and security control systems, supplying direct financial aid, or providing diplomatic and political support at the UN and other organizations, the United States has been a tacit partner in all Israeli actions. Beyond that is the recognition that violence is the only answer that Israel has allowed. Following on the denial of their own violent actions, by creating the narrative/myth of the heroic nature of their actions and the demonization of the other, violence becomes the norm and accepted manner (in Israel at least) of murdering a nation. At only one point did I question the authors, from a one-liner, saying “It is particularly odd that such a belief [in the efficacy of violence] should be held in the United States.” This slip -- as I hope it is -- denies the United States' historical legacy of using violence in all its ambitions of empire and control throughout the world, and its current cultural context of violence represented in much of the media.

The issue of what will be the final outcome of all this is represented in two discussions, one on a “Blueprint for a One-State Movement: A Troubled History,” the other on “The Ghettoization of Palestine.” Both discussions intersect on the overall goal of Israel, the complete “control of Mandatory Palestine.” The latter section emphasizes the current process of creating ever-decreasing territories divided into bantustans or ghettos that are completely subordinate to Israeli rule. In the case of Gaza that becomes essentially a large open air prison containing a million and a half Palestinians in a state of suspended livelihood.

An excellent summary of the Israeli ethos of violence towards Gaza is made effectively in “The Killing Fields of Gaza 2004- 2009.” The Israeli policymakers have resorted to using “brutal military power as a short-term reaction to a problem they had no idea how to solve politically.” From First Rains, to Summer Rains, then Autumn Clouds, and finally the overwhelming brutality of “Cast Lead,” the attacks on Gaza stem from military humiliation in their actions against Lebanon and the capture of one Israeli soldier, frustration at being able to find -- or want to find -- a peaceful alternative, and the lack of a clear policy, although the latter may well be a smokescreen as much as the "peace process" has served for the settlements. The whole population has been demonized, women and children included, based on the Israeli narrative of its moral superiority and right to all Palestinian lands. At first presented as part of the global war against the “World Jihad” the warrior stance has been refined to seeing Gaza as a terrorist base intent on destroying Israel. The use of such highly disproportionate firepower and the genocide of civilians in the attack revealed the “nature of the military operations … [as] an Israeli military wish to experiment with new weapons, all intended to kill civilians as part of … the need to brand in the Palestinian consciousness the fearsome might of the Israeli army.”

The recent revelations of the Palestine papers demonstrated how much the Palestinian Authority would give up to Israel -- much more than any Palestinian could reasonably be expected to allow, given the public face of the PA negotiators stance. That discussion will obviously follow on this work, and may change the image if not the actions of the PA in its acquiescence to the Israeli demands and wishes to the point of almost full capitulation. The PA struggle for survival and validity arrives at the same time as another larger event that carries greater significance for the region as a whole.

Egypt is mentioned several times through this work, always in a highly negative manner, although the topic is not developed beyond those mentions. When discussing the attacks on Gaza where “the Arabs are finding a way to do nothing as the Israelis slaughter Palestinian children,” the authors say of Egypt, “Perhaps the most shameful of the Arab regimes is the brutal Egyptian dictatorship, the beneficiary of the most U.S. military aid, apart from Israel.” Later, while discussing the policies in relation to the attacks on Gaza, its absolute control of the area, and its overall determination to “separate Gaza from the West Bank,” the authors indicate “These are only the bare outlines of very ugly policies, in which Egypt is complicit as well.” Finally while discussing the possibilities of peace in relationship to the new Obama government, the authors cite Obama’s words in relation to Mubarak as a “force for stability and good,” and a “stalwart ally, in many respects, to the United States.” From Obama’s words and actions it is seen that “support for democracy, and for human rights as well,” co-relates “closely with strategic and economic objectives.... Obama’s yearning for human rights and democracy [is] a joke in bad taste.”

As with all books examining current events, timing is critical for certain discussions. I look forward to a second volume that incorporates information and its impact and relevance concerning these two topics touched on in this work: the events and ramifications surrounding the Palestine Papers and the negotiations between the PA and Israel as revealed by al-Jazeera; and the events and ramifications of the Egyptian revolution again as witnessed primarily by al-Jazeera, but also by many others tuned into the internet for both news and the social networks that supported the revolution.

Both situations remain highly flexible, and there will be much in the way of the elites struggling to remain within the flow of influence, money, and whatever power they are allocated by their "superiors." A second edition of the current excellent work, with additional chapters relating to these topics would be well worth the effort.