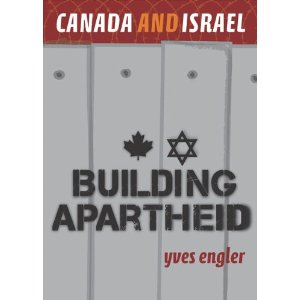 Oct. 5, 2010 (Palestine Chronicle) -- While much is made of U.S. support of Israel, its unstinting rhetoric and its similarly unstinting financial generosity, Canada has likewise been a strong supporter of Zionism and Israel.

Not only has Canada been strong, they have in certain respects been stronger and more faithful to Israel than the United States. In an enlightening little book,Canada and Israel -- Building Apartheid, Yves Engler documents the strength of the Canadian tendency to give full support to Israel regardless of international law.

There are four key points that underlie the work. The first is the recognition that Canada supported Zionism from the origins of the concept, from its fundamentalist Christian roots. Secondly, as part of the British Empire, a Dominion without an independent foreign policy, Canada gave full support to the ideas and actions of British Zionism -- from the Balfour Declaration through to the UN partition plan and subsequent UN votes, and on to the current fiascos with Lebanon, Gaza, and the supposed peace process.

Third, the Jewish population of Canada, while not wholly behind the Zionist concept -- it was originally given much support from Christianity as Israel needed to be filled with Jews for biblical prophecy to come true -- the wealthy Jewish elites, the politicians who catered to them, and the media being largely controlled by pro-Israeli corporate bosses, have consistently supported all Israeli actions and Zionist claims. Finally, when the British Empire stepped out of the way, the Canadians fell into step with the United States who accepted their Israeli partnership with lavish monetary, political, and military support.

The writer will demonstrate that….

Engler’s writing is clear and concise without wasted rhetoric. In the introduction he outlines what he wishes to demonstrate to the reader:

--Canada has supported all but one of Israel’s military adventures (Egypt).

--Biblical literalism and European nationalism played significant roles in the formation and ideology of both countries; both are “settler states.”

--“Uninterested in the welfare of the indigenous population,” Canada gave strong support to and helped shape the UN partition plan; followed by continued one- sided diplomacy supporting Israel - from Mossad/CSIS relations, to military, business, and private subsidized donations.

--Both main political parties -- Conservatives and Liberals, akin to the Republicans and Democrats in the United States -- lead to Canada being “the most pro-Israel country in the world.”

--Finally, the main thrust of this one sided support is Canada’s role as a sycophantic admirer of the U.S. empire -- at least at the level of the political-corporate elites.

Form those originating outlines, Engler delivers a hard driving compilation of facts, tendencies, and quotable quotes that do demonstrate Canada’s strong support of the Israeli dispossession of the Palestinian people.

Canada has supported Israel for the six decades of its existence, having previously given large support to the idea of Zionism (note that Canada, along with many other western countries, limited Jewish immigration to Canada after WW II) under the guidance of the British Empire. Having adopted the U.S. empire after the collapse of the British, Canada under Harper’s conservative government (which follows many of the U.S. Republican ideals) proclaimed in 2008 “that Canada was the most pro-Israel country in the world. So did Israeli officials.” While Canadian officials “pretend that Israel is working towards a Palestinian state,” their votes and actions give support to ongoing Israeli occupation and settlement against all international law.

Engler wonders how Canada’s credibility has been hurt or not. With our position on Israel, our support of the Washington consensus politically, our involvement in the U.S. imperial wars in Afghanistan, Canada’s political credibility should be very low, at least outside of areas that kowtow to U.S. imperial directives -- Europe, Australia and New Zealand. He states that “every Canadian who believes in the principles of human rights, even-handedness and peacekeeping in foreign affairs should be embarrassed by our government’s record.” Count me in on that one.

Canada is after all, just another part of the empire…

In summing up the reasons for Canada’s “overwhelming pro-Israel bias” Engler succinctly states his observations: the influence of religion (Harper is fundamentalist Christian as are many of his followers); the new threat of being called anti-Semitic (although the unreality of it hardly makes it a threat unless one is within the elite political/corporate system); the strength of the Jewish lobby in Canada (parallel with the United States) and the power of the U.S. empire in business and politics (most of Canada’s trade is with the United States, as their economy goes, so goes ours).

In the final section of his “will demonstrate that” format Engler quickly outlines these various influences. While they are all significant, the most important one -- Canada’s adherence to the U.S. empire -- is discussed last. Essentially Canada is enamoured of empire, at least the elites are, “Canada has long sided with empire” as in Afghanistan where “the occupation [is] largely about supporting the Washington led West’s geo-strategic position vis-a-vis Russia, China and Iran.”

The nature of Canada’s policy is such that “Social justice, humanism and morality rarely motivate Canadian foreign policy.” After listening to Canada’s new Governor General speak today on this same topic, I hope he will find the time to read this book. Further, another reiteration of the same idea is that “Canadian policy towards the Middle East has largely been designed to enable U.S. imperial designs on a strategic part of the planet.” (and to reiterate, as their wars go, so goes our economy.)

Unfortunately, as long as Israel continues in its geo-strategic role as “a secure bastion for Western interests,” and any threat to Israel is considered “a threat to Canada’s interests” and to “the broader Western civilization,” there will continue to be “ a powerful force pushing Canada to be one-sidedly pro-Israel.” That force, to say it again in another form, are the political and corporate interests of the U.S. empire of which Canada is a very willing participant, perhaps ignorantly so in that Canadians do not see themselves as being like “Americans.”

Engler offers some hope after all that. After the Gaza onslaught, 52 percent of Canadians believe Israel plays a negative role in the world, and only 28 percent believe it played a positive role. He states, “We need to create a political climate where justifying killing Palestinians and stealing their land is no longer acceptable.” Further for Canada in particular, “The point of our protests must not just be Palestinian suffering but rather Canadian complicity with that suffering.”

Engler suggests a variety of means to support the Palestinian cause, ranging from the current boycott divestment sanctions through to constitutional challenges on policies that contravene the Charter of Rights and Freedoms. Finally he recognizes that Canadian foreign affairs policy “is dominated by a small elite … and until that changes the interests of the foreign policy establishment will take precedence over social justice.” In other words, foreign policy needs to be “democratized” and not left to the elites who pretend to be savants with special knowledge that make policy complex and beyond the average persons comprehension -- the ‘average person’ shows considerable compassion and social intelligence when educated to the realities of Israeli occupation and settlement of Palestine.

The first step, mentioned last, “is to educate ourselves so that we can educate others.“ Works like his own excellent little book, Canada and Israel, will provide a solid basis for educating the reading public concerning Canada‘s role in Building Apartheid, and should be mandatory to be read by the politicians of the country.