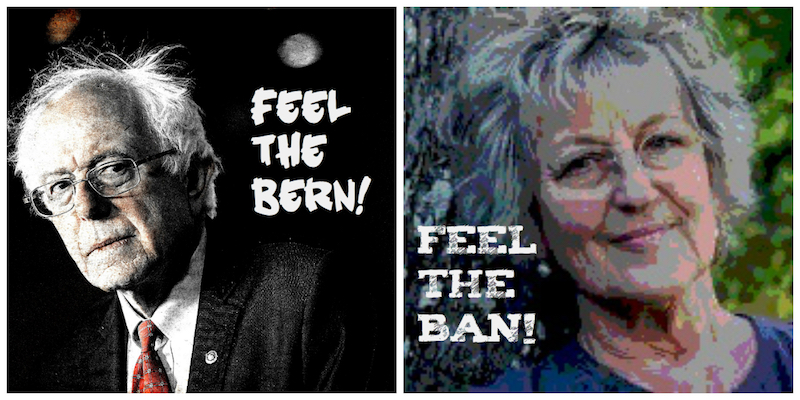 Welcome to the patriarchy.

Presidential candidate and current liberal darling Bernie Sanders is the 74-year-old “insurgent” leader of a “revolution.” He remains “fiery,” has been compared to abolitionist William Lloyd Garrison, and regularly draws huge crowds of supporters, many “in their teens and twenties.”

Even when he’s grumpy, it’s because “he's thinking about vets who need surgeries, guest workers who've had their wages ripped off, kids without access to dentists or some other godforsaken problem that most of us normal people can care about for maybe a few minutes on a good day.”

Even when he’s frumpy, it’s seen as a positive. “Sanders,” explains Tim Murphy at Mother Jones, “has never put a premium on aesthetics, but he does have a style.”

Pioneering feminist author and thinker Germaine Greer also has style but hers is akin to “exhibitionism.” She is “loud mouthed, rude and often obnoxious.” The 76-year-old has “made a career out of being outrageous.” Not just outrageous, mind you, but “outrageously offensive and a "coward."

Bernie just keeps getting better with age and even dances with Ellen but Greer? Well, she’s “never been that bothered about following through her arguments to their logical conclusions” and it’s questionable “whether her ideas over the years add up to anything coherent.”

Sanders is forever young and his supporters rail against anyone who mentions his age. Greer is a dinosaur, left to declare with exasperation: “Give me the right to grow up, let me age. In our society, elder women have no respect.”

This summer, Sanders spoke to 100,000 people across seven events. At the same time, Greer was being targeted by several thousand people who signed a petition protesting that she should not be allowed to give a lecture at Cardiff University because she has, in the opinion of the petitioners, “misogynistic views towards trans women.”

Greer is dealing with one inevitable offshoot of liberal feminism as Sanders benefits from another with "Women for Bernie Sanders” reminding us: “It’s not just an election, it’s a political revolution.”

Perhaps Bernie earned this libfem cred with lines like this, written back in the day: "A man goes home and masturbates his typical fantasy. A woman on her knees. A woman tied up. A woman abused. A woman enjoys intercourse with her man -- as she fantasizes about being raped by 3 men simultaneously."

Around the time Sanders was waxing poetically as a rape apologist, Greer was publishing her essential book, The Female Eunuch, in which she writes: "It is a vain delusion that rape is the expression of uncontrollable desire or some kind of compulsive response to overwhelming attraction. Any girl who has been bashed and raped can tell how ludicrous it is when she pleads for a reason and her assailant replies ‘Because I love you’ or ‘Because you’re so beautiful’ or some such rubbish. The act is one of murderous aggression, spawned in self-loathing and enacted upon the hated other."

Today, Greer the radical feminist is un-ironically called a "misogynist" for defending the reality of female-ness yet Sanders the career politician is the one credited for being “focused on reality.”

It’s Bernie who supports (among other nightmares) the Israeli war machine, Obama’s drone program, and (contrary to Sandernista propaganda) capitalism. Meanwhile, Germaine is de-platformed and left to fend off accusations of “hate speech.”

For those who still (somehow) deny that patriarchy is interwoven throughout every single aspect of modern life, consider this: According to the dominant culture, the phallocentric two-party lie has no expiration date, but radical feminism sure does.

"Bernie Sanders is 'Forever Young.' Germaine Greer is a 'Dinosaur'" by Mickey Z. is licensed under a Creative Commons Attribution-ShareAlike 4.0 International License.
Based on a work at https://worldnewstrust.com/bernie-sanders-is-forever-young-germaine-greer-is-a-dinosaur-mickey-z.
back to top