Bernie Sanders: Hire Me as Your Copy Editor! | Mickey Z. 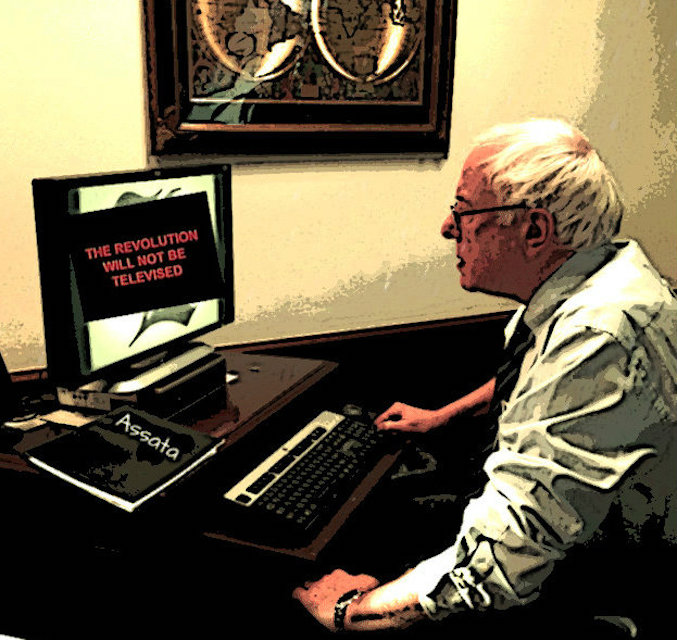 Rev·o·lu·tion - revəˈlo͞oSH(ə)n (noun): a forcible overthrow of a government or social order in favor of a new system.

The word on the street (and by “street,” I mean the internet) is that a 72-year-old white male career politician named Bernie Sanders has started a revolution.

Nothing riles me up quite like the sound of revolution, so I immediately clicked over to Bernie’s official website -- ready to join a hardcore rebellion. I had been assured by so many smart activists that Sanders was a genuine revolutionary. I came looking for revolt, insurrection, mutiny, and insurgency. What I found instead was a website in desperate need of a copyeditor.

Feel The Bern excerpt #1: “The American people must make a fundamental decision. Do we continue the 40-year decline of our middle class and the growing gap between the very rich and everyone else, or do we fight for a progressive economic agenda that creates jobs, raises wages, protects the environment and provides health care for all? Are we prepared to take on the enormous economic and political power of the billionaire class, or do we continue to slide into economic and political oligarchy? These are the most important questions of our time, and how we answer them will determine the future of our country.”

While this might arouse HuffPo readers, it’s hardly “revolutionary.”

My edit: “The American people must revolt. Do we continue the 40-year decline of our middle class and the growing gap between the very rich and everyone else, or do we defy the Blue Bloc, take the fight to the streets, and take the liberty that is rightfully ours? Are we prepared to incur massive casualties and the sacrifice of almost all our beloved creature comforts? These are the most important questions of our time, and how we answer them will determine the future of all life on our planet.”

Feel The Bern excerpt #2: “The United States must lead the world in tackling climate change, if we are to make certain that this planet is habitable for our children and grandchildren. We must transform our energy system away from polluting fossil fuels, and towards energy efficiency and sustainability. Millions of homes and buildings need to be weatherized, and we need to greatly accelerate technological progress in wind and solar power generation.”

This is fine… if you’re Al Gore. But I’d say #FeelTheBern needs to embrace a much, much darker shade of green.

My edit: “The people of the United States -- not its corrupt, so-called ruling class -- must lead the world in recognizing that climate change is just one of countless eco-issues to address. It’s not just about making certain that this planet is habitable for our children and grandchildren. We must defend all forms of life and accept that ‘going green’ is a liberal panacea. Do you realize that 93 percent of the large fish in the ocean are already gone or that 78 percent of old-growth forests are already gone? What about the 150 to 200 plant and animal species that go extinct every single day? ‘Sustainability,’ you say? Are you fuckin’ kidding me?”

Feel The Bern excerpt #3: “The United States must do everything it can to make certain that Iran does not get a nuclear weapon, that a nuclear Iran does not threaten Israel, and to prevent a nuclear arms race in the region.”

Bernie baby, do you wanna incite a rebellion or line up for AIPAC money?

My edit: “Hold on a minute, why is anyone seriously listening to the country that purposely dropped atomic bombs on Japanese civilians, irradiated half the fuckin’ planet with subsequent nuclear tests, and is using depleted uranium weapons as we speak? Yeah, there’s a nuclear rogue nation and it’s called the United States of America! Who the fuck do we think we are trying to pretend that anyone is safe as long as we have enough nukes to kill 20 Earths and have demonstrated the willingness, the eagerness to use ‘em? As for Israel, please don’t even get me started. Elect me and watch the unconditional military aid dwindle.”

Feel The Bern excerpt #4: “It is an outrage that in these early years of the 21st century we are seeing intolerable acts of violence being perpetuated by police, and racist terrorism by white supremacists. A growing number of communities do not trust the police and law enforcement officers have become disconnected from the communities they are sworn to protect. Violence and brutality of any kind, particularly at the hands of the police sworn to protect and serve our communities, is unacceptable and must not be tolerated. We need a societal transformation to make it clear that black lives matter, and racism cannot be accepted in a civilized country.”

I dig the BLM reference but why differentiate between “racist terrorism by white supremacists”  and “intolerable acts of violence being perpetuated by police”? Regardless, dude, let’s make it more clear: There’s a huge difference between your “societal transformation” and a revolution. Let your rad flag fly!

My edit: “Violence? You wanna talk to me about fuckin’ violence? Our entire culture is founded on and maintained by violence. Talking about non-violence in 2015 America is like debating wetness as your ride the Titanic to the bottom of the goddamned ocean. What I wanna know is when the fuck are we gonna name the problem? In the United States, 85 percent of murders, 90 percent of violent assaults, 95 percent of domestic and dating violence, 95 percent of child sexual abuse, and 99.8 percent of rapes are committed by men. Elect me and my administration’s top priority will be to recognize and end Male Pattern Violence.”

That’s as far as I got. But before I do any more work, I’m reaching out to all of you to find out who can put me in touch with Bernie’s campaign. I need a job. He needs a copy editor. It’s a match made in revolutionary heaven!

"Bernie Sanders: Hire Me as Your Copy Editor!" by Mickey Z. is licensed under a Creative Commons Attribution-ShareAlike 4.0 International License.
Based on a work at https://worldnewstrust.com/bernie-sanders-hire-me-as-your-copy-editor-mickey-z.