Beat Writer Pedophiles and the White Male Leftists Who Love Them | Mickey Z. 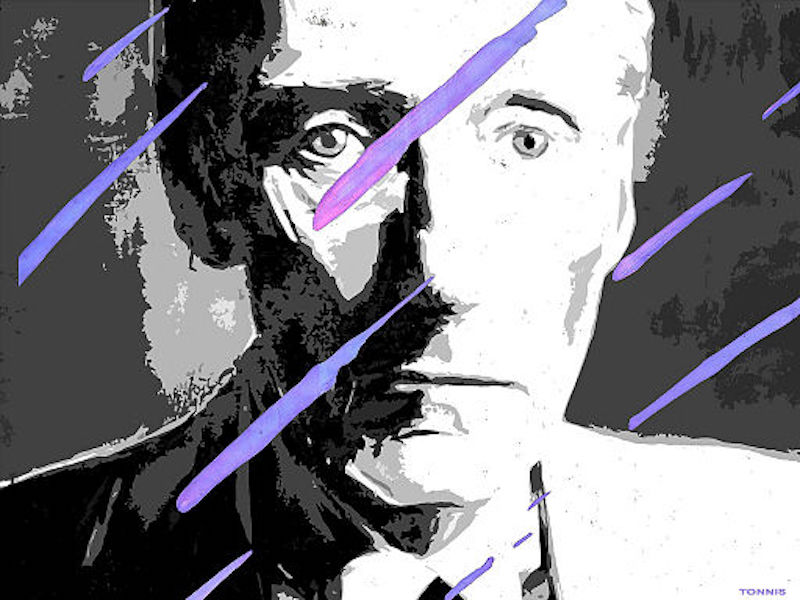 Rattling liberals is something I excel at without even trying, particularly when it comes to electoral politics. Lately, however, I’ve discovered a few other ways that I get under the skin of your average white, left-leaning male (middle-aged, even easier). For example, all I have to do is suggest they show some radical solidarity -- and some humanity -- by giving up two of their favorite pastimes:

Oh, how the male tears will flow…

Another way to guarantee an apoplectic, mansplainy fit: point out how many of their heroes were rapists and/or rape apologists, misogynists, pedophiles, and/or pedo-apologists. Tell a man of the Left about the predatory proclivities of his beloved male role models, then stand back to watch the phallocentric fireworks.

“Throw in some gross act”

Let’s commence this sordid sojourn by re-considering someone who -- I now admit with intense humiliation -- I once championed, Charles Bukowski. His work was awash in misogyny and racism but it was with a short story entitled “The Fiend” that Buk sunk to an unforgivable level and bared the depths of his degeneracy. Here he is discussing “The Fiend” (and related issues) with High Times in 1982:

Bukowski: “Erotic! I write about everything. The reason sex got into so much of my stories is because when I quit with the Post Office, at the age of 50, I had to make money. What I really wanted to do was write about something that interested me. But there were all those pornographic magazines on Melrose Avenue, and they had read my stuff in the Free Press, and started asking me to send them something. So what I would do was write a good story, and then in the middle I had to throw in some gross act of sex. And so I would write a story, and at a certain point I would say, ‘Well, it's time to throw some sex into it.’ And I would throw some sex in it and kept writing the story. It was okay, I would mail the story and immediately get a $300 check.”

Bukowski: “I don't know. Some people have written me and told me that some of my stories have aroused them. Especially ‘The Fiend.’ Now, why the story of a man raping a little girl arouses people I don't know. Perhaps a lot of men want to do it and it is only the law and the fear that prevents them from doing it. Perhaps the fact that I described her clothing, slowly, what happened, has excited somebody. But I didn't get a hard-on while I was writing it.”

I’ll give you a moment to scrub yourself in a scalding hot shower before we continue. Go ahead, I’ll wait.

Bukowski’s fellow poet -- in fact, the Beat Generation poet himself, Allen Ginsberg -- was eventually more forthcoming about what did and didn’t make him hard. But, at first, the liberal hero hid his desires behind bogus platitudes, e.g. “I became a member of NAMBLA (North American Man/Boy Love [sic] Association) ... as a matter of civil liberties. In the early 1980s, the FBI had conducted a campaign of entrapment and ‘dirty tricks’ against NAMBLA members just as they had against black and anti-war leaders in previous decades.”

If we are to take the widely revered wordsmith at face value, he saw the "rights" of men to abuse, assault, and rape children as being on par with those of activists risking arrest (or worse) to struggle against militarism and white supremacy.

In case you're naive enough (or twisted enough) to believe this "free speech" bullshit, please consider something else Ginsberg said, this time during a 1997 interview with The Harvard Gay & Lesbian Review: “Everybody likes little kids. … Naked kids have been a staple of delight for centuries, for both parents and onlookers. So to label pedophilia as criminal is ridiculous.”

Then we have Deliberate Prose: Selected Essays 1952-1995, a book in which his publisher (HarperCollins) claims Ginsberg "gave voice to the moral conscience of the nation." A book in which the poet's "moral conscience" led him to announce: “Prepubescent boys and girls don’t have to be protected from big hairy you and me, they’ll get used to our lovemaking in two days provided the controlling adults will stop making those hysterical noises that make everything sexy sound like rape.”

I'll give you a few minutes to unclench your fists and/or vomit before we revisit Ginsberg's proud standing as a member of NAMBLA. Go ahead, I’ll wait.

"Attacks on NAMBLA stink of politics, witch hunting for profit, humorlessness, vanity, anger and ignorance," he stated, before betraying his actual predatory motivations: "I'm a member of NAMBLA because I love boys too -- everybody does, who has a little humanity."

Clarity: That's not humanity, it's pedophilia.

On the day of the bar mitzvah newspapers reported in huge headlines that the Supreme Court had ruled child pornography illegal. I was thrilled. I knew that Allen would not be. I did think he was a civil libertarian. But in fact, he was a pedophile. He did not belong to the North American ManBoy Love Association out of some mad, abstract conviction that its voice had to be heard. He meant it. I take this from what Allen said directly to me, not from some inference I made. He was exceptionally aggressive about his right to fuck children and his constant pursuit of underage boys. I did everything I could to avoid Allen and to avoid conflict. This was my godson’s day. He did not need a political struggle to the death breaking out all over. Ginsberg would not leave me alone. He followed me everywhere I went from the lobby of the hotel through the whole reception, then during the dinner. He photographed me constantly with a vicious little camera he wore around his neck. He sat next to me and wanted to know details of sexual abuse I had suffered. A lovely woman, not knowing that his interest was entirely pornographic, told a terrible story of being molested by a neighbor. He ignored her. She had thought, “This is Allen Ginsberg, the great beat poet and a prince of empathy.” Wrong. Ginsberg told me that he had never met an intelligent person who had the ideas I did. I told him he didn’t get around enough. He pointed to the friends of my godson and said they were old enough to fuck. They were 12 and 13. He said that all sex was good, including forced sex. I am good at getting rid of men, strictly in the above-board sense. I couldn’t get rid of Allen. Finally I had had it. Referring back to the Supreme Court’s decision banning child pornography he said, “The right wants to put me in jail.” I said, “Yes, they’re very sentimental; I’d kill you.” The next day he’d point at me in crowded rooms and screech, “She wants to put me in jail.” I’d say, “No, Allen, you still don’t get it. The right wants to put you in jail. I want you dead.” He told everyone his fucked-up version of the story (“You want to put me in jail”) for years. When he died he stopped.

William Seward Burroughs II (also known by his pen name William Lee; February 5, 1914 – August 2, 1997) was an American novelist, short story writer, essayist, painter, and spoken word performer. A primary figure of the Beat Generation and a major postmodernist author, he is considered to be "one of the most politically trenchant, culturally influential, and innovative artists of the 20th century."

Curiously, they left out a very important word: pedophile. Perhaps some enterprising soul out there will add something like this excerpt (from a 1955 letter written by Burroughs in Tangiers and addressed to Allen Ginsberg and Jack Kerouac) to his Burroughs’ page:

“The Italian school is just opposite, and I stand for hours watching the boys with my 8-power field glasses. Curious feeling of projecting myself, like I was standing over there with the boys, invisible earthbound ghost, torn with disembodied lust. They wear shorts, and I can see the goose pimples on their legs in the chill of the morning, count the hairs. Did I ever tell you about the time Marv and I paid two Arab kids 60 cents to watch them screw each other—we demanded semen too, no half-assed screwing. So I asked Marv: ‘Do you think they will do it?’ and he says: ‘I think so. They are hungry.’ They did it. Made me feel sorta like a dirty old man…”

Contrary to the protestations of swooning men on the Left, none of the above is edgy and underground. It's not "trenchant" or "innovative." It's criminal, predatory, and pathological. To discuss Burroughs as a "culturally influential" icon and canonize his work without mentioning his sexual assaults on children (and his open celebration of such heinous crimes) is to support and sustain the rampant, ever-increasing pedophile culture.

I could go on but in case some of you might wonder why this matters so deeply, please allow me to clarify: Every time we remain silent in the face of patriarchy, rape culture, white supremacy, and male pattern violence, we are supporting all of that… and much more. Our silence and inaction keep this system strong by rendering it virtually invisible.

We talk and talk and talk about the horrific state of human culture, then talk some more about what needs to be changed. We go ‘round and ‘round in ever-tightening circles. But when will we dig deeper -- as deep as we can possibly go -- to begin comprehending the many ways hierarchical power manifests and the many ways we each choose to ignore and/or support it.

Name the problem, comrades, name the fuckin’ problem… even if that means we must begin by taking a long, hard look in the mirror.

Mickey Z. is the author of 13 books, most recently Occupy these Photos: NYC Activism Through a Radical Lens. Until the laws are changed or the power runs out, you can “like” his Facebook page here.

"Beat Writer Pedophiles and the White Male Leftists Who Love Them" by Mickey Z. is licensed under a Creative Commons Attribution-ShareAlike 4.0 International License.
Based on a work at http://worldnewstrust.com/beat-writer-pedophiles-and-the-white-male-leftists-who-love-them-mickey-z.