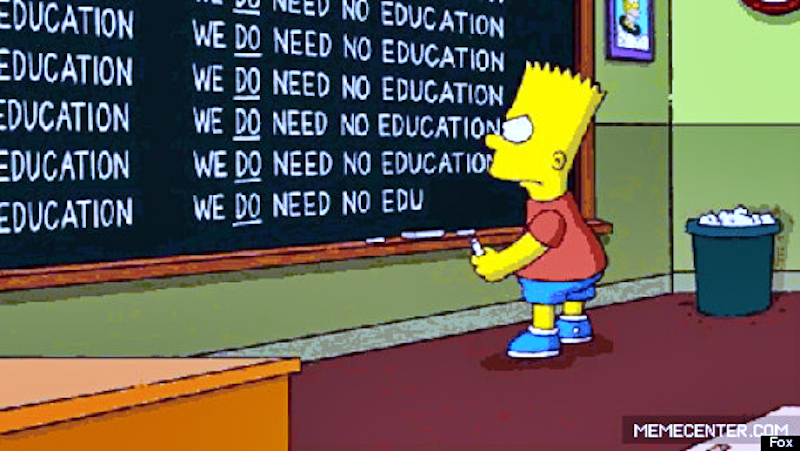 Activist Tip: Do your homework.

Earning a degree (or two) within the confines of the dominant culture puts you in a better position to make money. Making money, in turn, puts you in a better position to help those in need. Will mainstream education shape your mindset away from rebellion? It’ll sure try its damnedest. But do you not trust yourself to stay true to your values? If so, please don’t do what I did.

I didn’t go to college. At the time, I told myself the valid reason had to do with not wanting student loan bills for 20+ years. (Of course, had I taken high school more seriously, I would’ve easily earned a college scholarship… but I digress.)

Over the years, my decision to avoid college dovetailed nicely with my many radical awakenings. Soon, it became common to hear me brag about being “self-educated.” Even as my income options dwindled and this negatively impacted my personal life, I stubbornly stuck to my subversive guns. The activist hive mind is mighty powerful and, for a long time, I was no match and/or I didn’t put up much of a fight.

Activist Tip: Please don’t do what I did.

If I could call a do-over, yes… absolutely… I would’ve gone to college. Who knows? I might be a kick-ass lawyer right now -- using the legal system as best as I can to attain justice and save lives. I could’ve been one the true heroes (as opposed to the sign-holding virtue signalers) who worked non-stop at U.S. airports when Trump’s first travel ban took effect.

Or I may be a seasoned social worker -- directly impacting the everyday lives of the most vulnerable among us. Translation: Doing the real work.

Meanwhile, I still could’ve written books and traveled the country giving well-attended talks. That would’ve been a side thing, not my friggin’ claim to fame (sic). Instead, I earned a poverty wage by picking up garbage at LaGuardia Airport, washing cars for a third-rate auto rental business, working in the stock room of a now-defunct department store, and proofreading horrendously bad books for the country’s top (pre-Internet) vanity press. The list goes on.

But damn, I sure kept it real, didn’t I?

Let’s re-cap
I was born with privilege galore. But, in a desperate attempt to feel more rebellious (sic), I subconsciously sabotaged as much of that potential as possible. No college. Demonized money. Chose ridiculously unmarketable topics as an author. This self-fulfilling prophecy saw me marginalized and thrust into financial ruin, and thus enhanced my activist (sic) credibility (sic). I sought validation everywhere and would even become insulted and ashamed for being allowed on flights (post 9/11) without even a hint of trouble. Didn’t they know who I was? Don’t they read Counterpunch?

Eventually, like so many other white people (especially men), I recognized (on some level) that my daily life still presented virtually no oppression. Predictably, I chose to a) “represent” the suffering of non-humans and b) focus on the “big picture.” I wrote and talked and posted about ecocide -- “the worst problem because it impacts ALL of us.” (e.g. “Sure, it would be great to end police brutality but what would it matter without a functioning eco-system?”) So, while women live in daily fear of male violence and PoC live in daily fear of white violence, I played my revolutionary (sic) role by declaring my daily, hourly angst over clear-cut trees, fished-out oceans, and the rising extinction rate. Yep… I hit the radical white male trifecta: poor, deluded, and utterly ineffectual (although some radical white males avoid the "poor" part thanks to family resources).

What all life on the planet needs is compassionate and driven humans strategically playing all the cards they’ve been dealt -- in the name of collective liberation. And if it’s sustainable social change you want, stay far, far away from self-appointed “activists.”

To directly help me help homeless women in NYC, CLICK HERE and make a donation right now. And please spread the word!

Mickey Z. is currently writing two books, a political memoir called How to Change Minds & Influence the Future: Rebuilding Activism From the Ground Up (Microcosm Publishing) and a novella entitled stain red. In the meantime, he can be found here.

Attention Activists: Education is not “brainwashing” by Mickey Z. is licensed under a Creative Commons Attribution-ShareAlike 4.0 International License.
Based on a work at http://worldnewstrust.com/attention-activists-education-is-not-brainwashing-mickey-z.
back to top