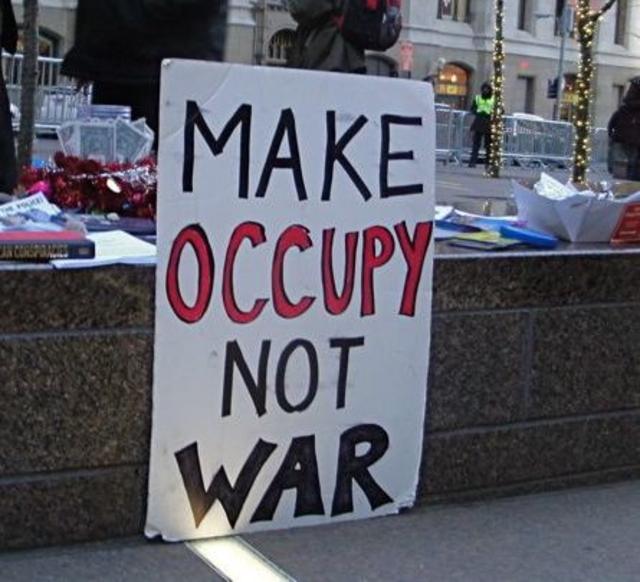 Look at the shoes you're filling/Look at the blood we're spilling
Look at the world we're killing/The way we've always done before --Axl Rose, "Civil War"

Apr. 12, 2012 -- During a recent exchange on Facebook, occupier Bill Perry discussed the need for Occupy Wall Street (OWS) to be more openly anti-war: "The argument from Sept. 17 through the end of 2011 was that only 70 percent of the 99% were against the war, and we might alienate the remaining 30 percent," he wrote.

To which, fellow occupier John Penley added: "OWS should take on the U.S. military-industrial complex in big way. This is something that has not been done on large scale. Military war spending is the root of many of the problems OWS has taken up but we have not targeted the source itself. I personally would love to see a call for national anti-military industrial complex anti-war actions."

"As a Viet Nam combat vet," says Perry, "I find the young-uns to be really embarrassing when they fawn over us vets, rather than fighting to cut the $700 billion defense budget that causes cuts in education, student loans, Medicare, Social Security, health care, housing, labor rights, and all the other issues without addressing where the money has gone."

Where the money has gone:

The U.S. Department of Defense (DoD) -- the interventionist institution formerly known as the War Department -- is the biggest polluter on Planet Earth, for example, releasing more hazardous waste than the five largest U.S. chemical companies combined.

To add insult to injury, the world's worst polluter -- the entity wrecking havoc upon the landbase that makes all life possible -- also gobbles up 54 percent of U.S. taxpayer dollars. But it takes more than obscene amounts of money to keep this criminal enterprise afloat. It also takes more than the volunteers willing to be paid to wage illegal, immoral, and eco-system destroying wars.

Mic Check: The DoD will be able to maintain its global crime spree as long as so many of us continue to unconditionally support (sic) those troops.

While most American citizens -- even if they’re anti-war -- are manipulated, harassed, coerced, and guilted into hanging yellow ribbons, generation after generation of U.S. military personnel has suffered a distinct lack of support from their own government (and the corporations that own it). “Our troops” are just as controlled and exploited as the U.S. citizens who worship them.

According to the U.S. Department of Veterans Affairs (VA), about one-third of the adult homeless population is veterans and most of them are single, from urban areas, and suffer from mental illness, alcohol and/or substance abuse, or co-occurring disorders.

More from the VA:

People of all ethnicities may sign up to defend (sic) the land of the free (sic) but 56 percent of all homeless vets are African American or Hispanic (despite only accounting for 12.8 percent and 15.4 percent of the U.S. population, respectively).

Now add this to the mix: The number of suicides among people serving in the U.S. armed forces has jumped more than 25 percent since 2005. In 2010 alone, 454 service members killed themselves in combat zones.

Despite the insidious and pervasive pro-military propaganda, the U.S. war machine is not only destroying entire cultures abroad, killing our ecosystem, and pillaging our economy, it also runs on the blood of what it views as "expendable" humans.

The U.S. war machine must be stopped.

"At the beginning of the OWS Occupation, of which I was a part of even before the first day, I had a debate with anti-war hardcore activist Cindy Sheehan," says John Penley. "The debate was that Occupy was not taking on the military-industrial complex and was too patriotic and too focused on domestic economic issues. I told Cindy, on Facebook, to give the movement more time to develop and that it would eventually come around. Well, sad to say, I was dead wrong."

Mic Check: OWS is not ignoring U.S. foreign policy as these excerpts from the official Declaration of the Occupation of New York City demonstrate:

Still, there are many reasons why we must occupy even more intensely against U.S. foreign policy. At the same time, we must be careful to not downplay the issues that helped spawn OWS -- because the underlying economic connections run deep:

If a more equitable economic climate were created -- with help from OWS -- young Americans would no longer be compelled to enlist solely for financial reasons (and by doing so, provide manpower for wars of Empire). In such a scenario, those who do volunteer could then rightfully be exposed as willing accomplices to U.S war crimes and maybe we can finally retire all those counterproductive "support the troops" stickers.

Until then, as Perry and Penley urge, we must keep this issue front and center. "People who know me know that I have been using a U.S internment flag at Occupy protests and there are many pictures of me with it," says Penley. "If Occupy does not focus more on the anti-war issue, I pledge to burn that flag at the Democratic National Convention in Charlotte, NC this summer."

Mic Check: While I can understand any concern that such a gesture could alienate some sectors of the general population, I feel it's become far more urgent to drive home the point that anti-war doesn't just mean anti-Republican.

"Anti-war" isn't a useful mask to wear at an election season costume party. This label signifies one as being against all war (except class war) no matter what political party has commenced the invasion, the bombing, the sanctions, or the covert operations.

Therefore, the Occupy movement must remain guided by a deep-seated anti-war sentiment to avoid playing into the hands of the 2012 two-party (sic) game... a game with no long-term winners.

As Bill Perry concludes: "It's time to step up and re-focus."

#OccupyYerStory
It's time we counter the media misinformation and 1% propaganda with a dose of reality -- the hard work, the community, the solidarity, the creativity, the innovation, and the durability behind the OWS banners.

Send me a few lines about your experiences, etc. so I can continue writing The Voices of #Occupy.

Together, we can stop the underestimating and help spread the word that this is the Global Spring and the 1% should fuckin' expect us…

#OccupyYerStory to me: This email address is being protected from spambots. You need JavaScript enabled to view it.