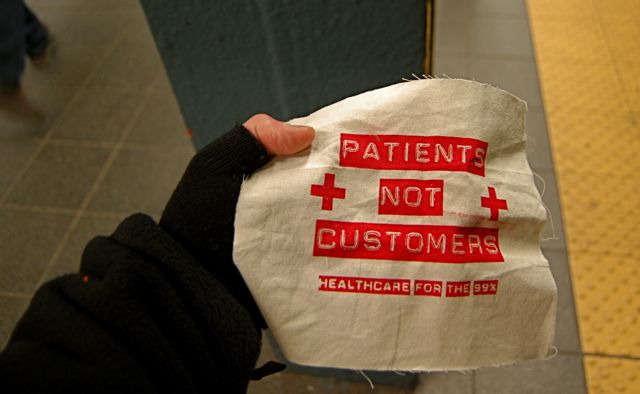 By now, I’m guessing the vast majority of you have heard about movie star Angelina Jolie choosing to have a double mastectomy to reduce her risk of breast cancer.

(Something you may not have heard: Jolie’s announcement caused the stock price of Myriad Genetics to skyrocket to a 52-week high.)

Anyway, as explained by the New York Times, “Ms. Jolie had a family history of cancer and tested positive for genetic flaws in the BRCA1 gene, which indicates an elevated risk for breast and ovarian cancer. Her doctor estimated that she had an 87 percent chance of developing breast cancer.”

The predictable spin ensued -- from the scientific to the sexist and well beyond. To follow are two mostly ignored angles, offered in the name of context.

Gene Genie
When I heard of Jolie’s decision, I was instantly reminded of a book I reviewed many years ago, Profitable Promises: Essays on Women, Science, and Health, by Ruth Hubbard. Here are a few relevant excerpts from that review:

Hubbard takes aim at the predictive tests being trumpeted by the pharmaceutical and biotechnology industries; especially moving is her take on the movement towards terminating pregnancies when the baby is predicted to born with a disability.

“In retrospect," she writes, "most people would admit that the world would not have been a better place without Woody Guthrie or Stephen Hawking, even though Guthrie had Huntington disease and Hawking has amyotrophic lateral sclerosis. And it would not be better without the people I know who are blind or deaf or have spina bifida, osteogenesis imperfecta, or some other disability. All of them contribute to society and are who they are both because, and in spite, of their health conditions. Who can say that they would be a more complete and effective human being without these health conditions? No one has the foreknowledge to decide who should or should not be part of the range of human diversity, and we do not want genetic commissars to deliver judgments about who should and who should not inhabit this world.”

Not to mention that such genetic tests may be more motivated by economics than medicine.

“Predictive tests are much more profitable than therapies,” Hubbard explains, “since therapies are of use only to people who have the condition that the therapy is intended to improve or cure, whereas entire populations can be turned into consumers of predictive or screening tests.”

Of course, the profit-driven elite has not completely cornered the market on dubious motives for supposed medical advances. Political discourse is often peppered with misguided genetic references; references Hubbard angrily and deftly dismisses.

“We are not the expression of our genes,” she declares, “and knowing their location on the chromosomes, or their composition, does not enable someone to predict what we will look or be like. It is a mistake to put too much weight on genes or DNA.”

Define “Prevention”
Those in power have a vested interest in putting “too much weight on genes or DNA.” If we perceive cancer (and myriad other preventable conditions) virtually as “fate,” we aren’t likely to closely investigate the lifestyles we’re programmed to obediently consume.

While the New York Times claims that Jolie’s decision “greatly raises public awareness of the genetic testing she used, as well as concerns about insurance coverage for this kind of testing,” the newspaper of record deftly and predictably ignores any mention of context like:

“How plant-based do we need to eat?” asks Kathy Freston, author of The Lean, Veganist, and Quantum Wellness. Studies, she explains, “suggest that we should lean toward eliminating animal products from our diets altogether. This is supported by the new study in which the thousands of American vegans studied not only had lower rates of obesity, diabetes, and hypertension, but significantly lower cancer risk as well.”

Freston goes on to cite research done by Drs. Dean Ornish and Elizabeth Blackburn in which “they found that a vegan diet caused more than 500 genes to change in only three months, turning on genes that prevent disease and turning off genes that cause breast cancer, heart disease, prostate cancer, and other illnesses.”

Read that again: Turning off genes that cause breast cancer.

“This is empowering news,” writes Freston, “given that most people think they are a victim of their genes, helpless to stave off some of the most dreaded diseases. We aren't helpless at all; in fact, the power is largely in our hands. It's on our forks, actually.”

Imagine
While I support Angelina Jolie’s right to do what she pleases with her body, I can’t help but imagine how incredibly valuable it could’ve been if someone as high-profile as she were not raising “public awareness of the genetic testing she used, as well as concerns about insurance coverage for this kind of testing.”

Imagine if she instead called a press conference to raise public awareness of the role corporate power plays in creating epidemics of preventable diseases.

Imagine if she urged all her fans to reject the lifestyle choices I mention above -- and more -- to take back control over and responsibility for their own health.

Imagine if she shared the bad news that we are being relentlessly manipulated, lied to, programmed, and conditioned -- but also shared the good news that we can each, in a flash, rediscover the subversive pleasure of critical thought.

Imagine… it’s easy if you try.

NYC EVENT: Join Mickey Z. (after the March Against Monsanto) at Washington Square Park for a teach-in called “Food Justice, GMOs, & the Vegan Option (Eat Like a Revolutionary)”: Saturday, May 25, 2013 @ 3pm.