Amidst the racial strife, we’re ignoring a pandemic (no, not THAT pandemic) | Mickey Z. 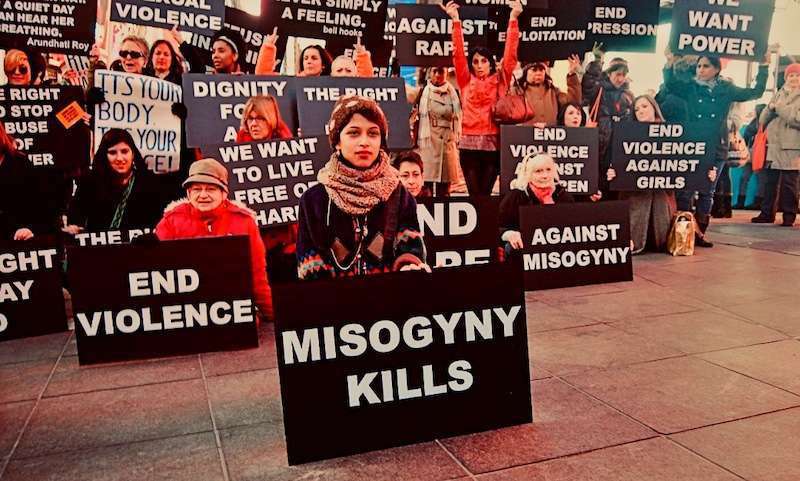 What if I were to tell you about a virtually ignored state of emergency, a lethal pandemic of which the exact numbers will never be fully known? I’m pretty sure you’d have a few guesses as to what I mean… but I’m also pretty sure those guesses would be inaccurate.

There are some very predictable reactions whenever a person of color is murdered by white cops. One of those reactions involves the rich and famous abruptly noticing that the reason for their wealth and notoriety is ultimately, um… less than essential?

Case in point: In the Twitter screenshot below, an NBA player was having an existential crisis because basketball suddenly means nothing in the big picture (or even the medium-sized picture, I’d add). Reactions like this never fail to leave me with questions. Here are two of ‘em:

What I’m talking about here is Male Pattern Violence. Sex-based violence. A global terror war that’s being waged by males against females for centuries… after being normalized in The Bible.

We can talk all day about structural abuse like white supremacy, homophobia, capitalism and class, ability/disability, ageism, and more. But every single one of these oppressions contains patriarchy. Women are victimized regardless of their age, wealth, ethnicity, sexuality, geographic location, etc. Misogyny is the foundation and, until that fact is widely acknowledged, every struggle for justice is doomed to merely putting out fires.

Disclaimer: I am not saying that people shouldn’t be outraged by police brutality and its foundation of systemic white supremacy. I am suggesting it’s long overdue that violence against women and girls finally starts trending.

So, friends, while you’ve got your typing fingers warmed up with all the #BlackLivesMatter posts, how about aiming some of your energy toward the ubiquitous dilemma of sexism?

“Women as a class have never subjugated another group.” (Susan Brownmiller)

“Femicide is the killing of females by males because they are females,” explains Diana E.H. Russell. “This term was first used in public by me at the International Tribunal on Crimes Against Women in Brussels in 1976. It highlights the fact that misogyny is a significant factor in most murders of females by males.”

Under the phallocentric guise of “honor” or “revenge” or whatever warped patriarchal premise being perpetrated, males are actively and relentlessly abusing, assaulting, and killing females, most often those closest to them.

“One manifestation of this reality is that a majority of these murders are perpetrated by husbands and ‘boyfriends,’” explains Russell. “Intimate partner femicide is the term used by researchers for this form of femicide.”

The numbers are staggering and -- as one might imagine -- virtually impossible to accurately tally. Thus, for now, I’ll start with what appears to be a very, very conservative estimate: According to the Violence Policy Center, 1,948 women were murdered by men in 2017. More than five women per day… and 92 percent of them knew their murderer.

Where are their hashtags?

At least five women per day are murdered by men -- but that’s only in the United States. Here’s but a sampling of how the underreported femicide epidemic is truly global and growing:

In Mexico, six women are murdered per day (related podcast here). The femicide rate in Colombia, with a much smaller population, is one every two days. Guatemala reports two women murdered per day with a prosecution rate of 2 percent. Women for Justice, Education, and Awareness describes the situation as such:

“Women are particularly vulnerable in unsafe environments such as sex work where poverty and organized crime are commonplace. The majority of victims come from disadvantaged backgrounds and have already been victims of trafficking or working in the sex trade," it says. "Perpetrators enjoy a state of widespread impunity. The Guatemalan government considers femicide of low priority as a result of patriarchal beliefs and views on the role of women in society.”

As for the so-called “honor” killings proscribed by male supremacist predators, it’s pandemic with (reported) numbers as high as 200 per year in nations like Syria and Turkey.

Where are their candlelight vigils?

The list goes on and on. The carnage appears limitless. Further information is readily available to anyone with access to a search engine, but I’d be remiss if I didn’t mention India where, as Rita Banerji details, “More than 50 million women have been systematically exterminated from India’s population in three generations, through the gender-specific infliction of violence in various forms, such as female feticide through forced abortions, female infanticides, dowry murders, and honor killings.”

Read that one again: 50 million victims of femicide in only three generations.

Where are the tweets from celebrities suddenly shocked into reality?

If (for some unexplainable reason) the terrorism described above isn’t enough to capture your attention and motivate you to action, please consider that these examples of femicide don’t even factor in the incalculable number of virtually invisible females targeted but not immediately murdered:

“Femicide,” explains Russell, “is on the extreme end of a continuum of anti-female terror that includes a wide variety of verbal and physical abuse, such as rape, torture, sexual slavery (particularly in prostitution), incestuous and extra-familial child sexual abuse, physical and emotional battery, sexual harassment (on the phone, in the streets, at the office, and in the classroom), genital mutilation (clitoridectomies, excision, infibulations), unnecessary gynecological operations (gratuitous hysterectomies), forced heterosexuality, forced sterilization, forced motherhood (by criminalizing contraception and abortion), psychosurgery, denial of food to women in some cultures, cosmetic surgery, and other mutilations in the name of beautification. Whenever these forms of terrorism result in death, they become femicides.”

Where are all the public institutions expressing outrage and solidarity?

In order to address the war on women, it is required that we recognize the reality that men -- of all colors, classes, religions, etc. -- are the engines of almost all violence, domination, and oppression.

Relevant to today’s headlines, please consider how studies find at least 40 percent of police officers engage in domestic violence (for context, that number is 10 percent within the general population).

According to the U.S. Justice Department, murder is primarily the domain of males, e.g:

Sexual assault is also an almost exclusively male-on-female crime spree with 99.8 percent of those convicted of rape being male. Rape culture is a top-down, class-based, patriarchal institution.

This isn’t my opinion or agenda or personal bias. Extraordinary claims require extraordinary evidence but, folks… the evidence is in: Males as a class are the johns, the rapists, the assaulters, the pornographers, the exploiters, the traffickers, and the murderers.

“Acts of violence against women are mass atrocities, mass human rights violations, widespread and systematic attacks on the basis of sex, cries against humanity pervasively unaddressed,” writes Catharine A. MacKinnon. “If violence against women were considered a war inside one country, an armed conflict ‘not of an international character,’ much of happens to women every day all over the world would be crisply prohibited by the clear language of Common Article 3 of the Geneva Conventions.”

We are talking about a pandemic of violence, an outright war against a specific class of marginalized human beings -- so when will we start calling the killing of women and girls, a hate crime?

How many more will be murdered before we wake up and declare “no justice, no peace?”

Where is the talk of “revolution” and “shutting shit down”?Where are the heart-wrenching memes and the clever t-shirts? Where are the myriad websites and social media campaigns? Where are the weekly rallies, protests, sit-ins, die-ins, and marches? How long before we join together to create a world in which females are not systematically and intentionally targeted for demise?

(While the focus is squarely on the Minneapolis police force, when will we talk about the 1,700 untested rape kits -- dating back to the 1990s -- that just turned up?) 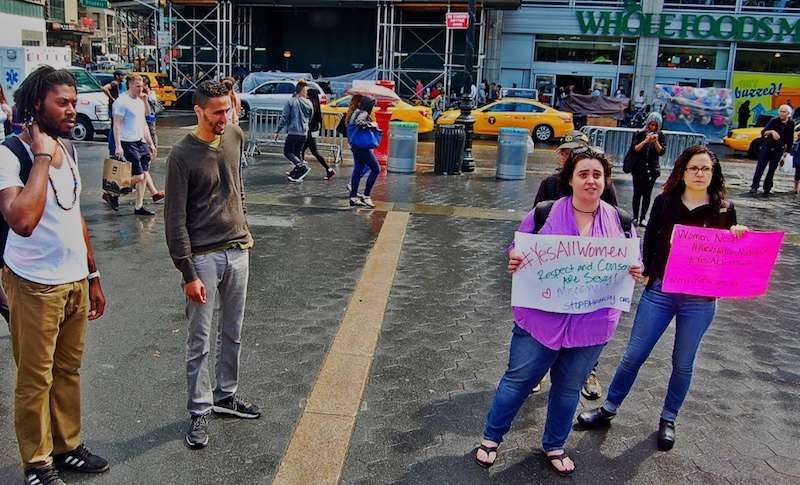 Note to my male readers: Since virtually everything females do to resist patriarchy can be pornified, commodified, weaponized, and used against them, the change must begin with us men. If we men want to live up to self-anointed labels like activist, revolutionary, radical, ally, comrade, or just “nice guy,” the path is clear. We are required to do almost all of the initial work and make (by far) the biggest changes and commitments. If we care about justice and liberation as much as we claim we do, now is the time to look in the mirror, to call ourselves out, to check our egos and our masculinity programming at the door, and to make what appear to be major sacrifices (pro tip: they’re not).

We men must name the problem, over and over again, until we stop being the problem and stop passing on the problem to the next generation.

Disclaimer: I am not saying that people shouldn’t be outraged by police brutality and its foundation of systemic white supremacy. I am suggesting it’s long overdue that violence against women and girls finally starts trending.

The topics of racism and white supremacy and the topics of misogyny and patriarchy must all be tackled 24/7, forever. This must happen if we want to survive. It’s not an either-or situation. You don’t have to choose only one oppression to care about and you most certainly shouldn’t be worrying about which cause will get you the most “likes.”

Imagine instead if the murders of George Floyd and Breonna Taylor could finally be the catalysts for the creation of broad, sustainable coalitions and new strategies against all oppression.

Imagine if we as a culture would finally abandon the impotent "activist" tactics that leave us mired in failure.

Imagine if we regularly asked ourselves why we focus more on the inanities of pop culture than on helping the vulnerable souls who are within our reach.

Amidst all the suffering and the civil unrest, let’s each of us wake up to the pandemic of patriarchy and do our small part to mitigate its deadly spread.

Amidst the racial strife, we’re ignoring a pandemic (no, not THAT pandemic) by Mickey Z. is licensed under a Creative Commons Attribution 4.0 International License.

Based on a work at https://worldnewstrust.com/amidst-the-racial-strife-we-re-ignoring-a-pandemic-no-not-that-pandemic-mickey-z.