After one century of public relations, we march in lockstep | Mickey Z. 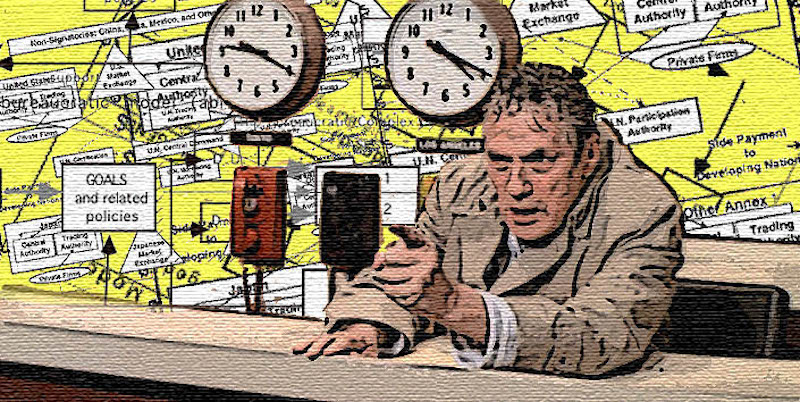 “As force is always on side of the governed, the governors have nothing to support them but opinion.”

I missed the literal anniversary (in April), but it’s been exactly one full century since the United States entered WW I -- despite most Americans wanting nothing to do with it.

So, as you read this article -- thanks to social media on your smart phone -- let’s commemorate a full century of the public relations industry.

“A scientific method of managing behavior”
Thanks to Joseph Goebbels, propaganda is officially a dirty word. But when Edward Bernays -- nephew of Sigmund Freud, public relations pioneer, and America’s most innovative social engineer -- got his start in the early 20th century, it was a word less charged but equally as potent. In fact, Bernays unabashedly named one of his books Propaganda.

“Edward Bernays was surely one of the most amazing and influential characters of the 20th century,” explains John Stauber, co-author of Toxic Sludge is Good for You: Lies, Damn Lies, and Public Relations. “He was a nephew of Sigmund Freud and helped to popularize Freudianism in the United States. Later, he used his relation to Freud to promote himself. And from his uncle's psychoanalysis techniques, Bernays developed a scientific method of managing behavior, to which he gave the name ‘public relations.’”

The Vienna-born Bernays was heavily influenced, of course, by his uncle’s work but it was in the service of war that he helped shape what we call “PR” today.

Safe for Democracy™
In what Stauber calls “perhaps the most effective job of large-scale war propaganda which the world has ever witnessed,” the Committee on Public Information, run by veteran newspaperman George Creel with the help of others like Edward Bernays, used all available forms of media to promote the noble purpose behind WW I: To keep the world safe for democracy.

The average American was notoriously wary of any hint of their country entering the bloody conflict. As a result, men like Creel and Bernays were called upon to change some minds with some good old-fashioned propaganda and persuasion.

The Creel Committee (as it came to be known) was the first government agency for outright propaganda in U.S. history; it published 75 million books and pamphlets, had 250 paid employees, and mobilized 75,000 volunteer speakers known as “four minute men,” who delivered their pro-war messages in churches, theaters, and other places of civic gatherings.

The idea, of course, was to give the war effort a positive spin. To do so, the nation had to be convinced that doing their part to support global military conflict on a scale never before seen was indeed a good idea.

“It is not merely an army that we must train and shape for war,” President Woodrow Wilson declared at the time, “it is an entire nation.” The age of manipulated public opinion had begun in earnest.

Although Wilson won reelection in 1916 on a promise of peace, it wasn’t long before he severed diplomatic relations with Germany and proposed arming U.S. merchant ships -- even without congressional authority. Upon declaring war on Germany in December 1917, the president proclaimed, “conformity will be the only virtue and any man who refuses to conform will have to pay the penalty.”

In time, the masses got the message as demonstrated by these (and other) results:

Buoyed by the indisputable success of the Creel Committee and armed with the powerful psychoanalytical techniques of his Uncle Sigmund, Bernays set about shaping American consciousness in a major way. Pass the Freedom Fries™ and read on…

“The conscious and intelligent manipulation of the organized habits and opinions of the masses is an important element in democratic society. Those who manipulate this unseen mechanism of society constitute an invisible government which is the true ruling power of our country. We are governed, our minds are molded, our tastes formed, our ideas suggested, largely by men we have never heard of. This is a logical result of the way in which our democratic society is organized. Vast numbers of human beings must cooperate in this manner if they are to live together as a smoothly functioning society.”

Bernays’ vision of a smoothly functioning society had a dominant economic component. As described by Tim Adams of the London Observer, Bernays “thought that the safest way of maintaining democracy was to distract people from dangerous political thought by letting them think that their real choices were as consumers.”

A fine illustration of Bernays’ approach involves his efforts -- for the American Tobacco Company -- to persuade women to take up cigarette smoking. His slogan, “Reach for a Lucky Instead of a Sweet,” exploited women's fear of gaining weight (a concern consciously manufactured through previous advertising and/or public relations work).

While Lucky Strike sales increased 300 percent in the first year of Bernays’ campaign, there was still one more barrier he needed to break down: smoking remained mostly taboo for “respectable” women.

This is where some watered-down Freud came in handy. As Bernays biographer Larry Tye said, he basically wanted to take his uncle’s works and “popularize them into little ditties that housewives and others could relate to.” With input from psychoanalyst A.A. Brill, Bernays conjured up the now legendary scheme to re-frame cigarettes as a symbol of freedom.

"During the 1929 Easter Parade," explains New York Times reporter Ron Chernow, "he had a troupe of fashionable ladies flounce down Fifth Avenue, conspicuously puffing their 'Torches of Freedom,' as he had called cigarettes."

As Chernow reports, Bernays augmented this successful stunt by lining up "neutral experts" to "applaud the benefits of smoking, all the while concealing the tobacco company's sponsorship of his activity."

Bernays was also concealing his knowledge of tobacco's deleterious effects. "As he hypocritically seduced American women into smoking, he was trying to wean his own wife from the nasty habit," Chernow continues. "His daughter Anne Bernays, the novelist, recalls that whenever he discovered a pack of his wife's Parliaments, 'he'd pull them all out and just snap them like bones, just snap them in half and throw them in the toilet. He hated her smoking'."

Today, we might call the Easter Parade stunt a “photo op,” but Bernays saw such efforts as “overt acts.” As demonstrated by the events leading up to the 1954 U.S.-sponsored coup in Guatemala, he had nothing against covert acts either.

“A gold piece for every banana”
“Bernays believed, and argued to Eisenhower, that fear of communists should be induced and encouraged, because by unleashing irrational fears, it would make Americans loyal to the state and to capitalism,” writes Tim Adams, in the London Observer.

1924: The Guatemalan government gives a concession to the United Fruit for all the uncultivated lands in a 100 kilometers territory.

United Fruit’s domination of this Central American nation was challenged when, in a landslide victory, Jacobo Arbenz was freely and fairly elected president of Guatemala in 1951. Wishing to transform his country “from a backward country with a predominantly feudal economy to a modern capitalist state,” Arbenz’ modest reforms and his legalizing of the Communist Party were frowned upon in U.S. business circles.

The Arbenz government became the target of a U.S. public relations campaign headed by none other than Edward Bernays.  “As I anticipated,” the PR pioneer boasted, “public interest in the Caribbean skyrocketed in this country.”

Two years after Arbenz became president, Life magazine featured a piece on his “Red” land reforms, claiming that a nation just “two hours bombing time from the Panama Canal” was “openly and diligently toiling to create a Communist state.”

It matters little that the USSR didn’t even maintain diplomatic relations with Guatemala; the Cold War was in effect. Ever on the lookout for that invaluable pretext, the U.S. business class scored a public relations coup when Arbenz expropriated some unused land controlled by United Fruit Company. His payment offer was predictably deemed inappropriate.

“If they gave a gold piece for every banana,” Secretary of State John Foster Dulles clarified, “the problem would still be Communist infiltration.”

“Articles began appearing in the New York Times, the New York Herald Tribune, the Atlantic Monthly, Time, Newsweek, the New Leader, and other publications all discussing the growing influence of Guatemala's Communists,” writes Larry Tye, Bernays’ biographer. “The fact that liberal journals like The Nation were also coming around was especially satisfying to Bernays, who believed that winning the liberals over was essential.”

Bernays’ clandestine efforts led directly to a brutal military coup when the CIA put Operation Success into action. “A legally elected government was overthrown by an invasion force of mercenaries trained by the CIA at military bases in Honduras and Nicaragua and supported by four American fighter planes flown by American pilots,” explained historian Howard Zinn.

Once in power, Colonel Carlos Castillo Armas, a man who was trained at Fort Leavenworth, Kansas, gave back the land to United Fruit, abolished the tax on interest and dividends to foreign investors, eliminated the secret ballot, and jailed thousands of political critics. The CIA coup ushered in decades of repression, resulting in more than 200,000 deaths.

A hundred years of keeping us passive, divided, and distracted
I could go on and on detailing the damage done by Edward Bernays and his ilk yet never keep up with the deluge. In the era of social media and a 24-hour news cycle, we are now exposed to more propaganda than ever before as Bernays’ PR progeny continue refining and honing their skills -- keeping us passive, divided, and distracted.

One hundred years and counting, with no end in sight…

After one century of public relations, we march in lockstep by Mickey Z. is licensed under a Creative Commons Attribution-ShareAlike 4.0 International License.
Based on a work at https://worldnewstrust.com/after-one-century-of-public-relations-we-march-in-lockstep-mickey-z.