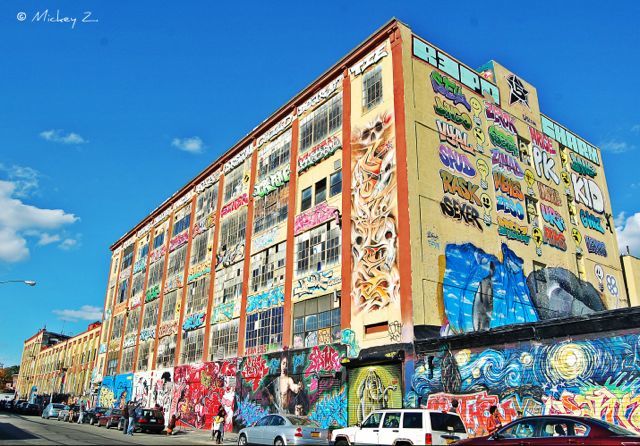 “You’ve got to learn that when you push people around, some people push back. As they should.  As they must. And as they undoubtedly will. There is justice in such symmetry.”

As I stood in front of the painted-over walls of the 5 Pointz graffiti building on the morning of Nov. 19, 2013, I was asked: “Why did they do this?”

Without even a second’s hesitation, I replied: “Because they can.”

And because they can, they will continue doing whatever the fuck they want to do. Until they are given a powerful reason to stop, they will not stop.

This line of thinking reminded me of something I read in Jennifer Harbury’s excellent 1995 book, Bridge of Courage. Harbury quotes a Guatemalan freedom fighter named Gabriel, responding to a plea to embrace non-violent resistance:

"In my country child malnutrition is close to 85 percent,” he explains. “Ten percent of all children will be dead before the age of five, and this is only the number actually reported to government agencies. Close to 70 percent of our people are functionally illiterate. There is almost no industry in our country -- you need land to survive. Less than 3 percent of our landowners own over 65 percent of our lands. In the last 15 years or so, there have been over 150,000 political murders and disappearances ... Don't talk to me about Gandhi; he wouldn't have survived a week here. There was a peaceful movement for progress here, once. They were crushed. We were crushed. For Gandhi's method to work, there must be a government capable of shame. We lack that here."

News Flash: We lack it here, too.

The U.S. government -- and the corporations that staff and fund it -- will never make decisions based on shame. They will, however, heavily factor in the concept of risk.

Please allow me to introduce another book excerpt, this one from Derrick Jensen’s Endgame. Jensen tells of a discussion he had with a longtime activist.

“She told me of a campaign she participated in a few years ago to try to stop the government and transnational timber corporations from spraying Agent Orange, a potent defoliant and teratogen, in the forests of Oregon,” he writes.

All too predictably, the dedicated demonstrators assembled to protest the toxic spraying were, “like clockwork,” ignored by the helicopter pilots. Both humans and landscape ended up thoroughly doused with Agent Orange—time and time again. The protest campaign obviously had no effect, so a different approach was taken.

“A bunch of Vietnam vets lived in those hills,” the activist told Jensen, “and they sent messages to the Bureau of Land Management and to Weyerhauser, Boise Cascade, and the other timber companies saying, ‘We know the names of your helicopter pilots, and we know their addresses.’

“You know what happened next?” she asked.

“I think I do,” Jensen responded.

“Exactly,” she said. “The spraying stopped.”

The Moral of This Story

It’s not enough to hope the powers-that-be stop gunning down young black men, to wish they stop poisoning our food, to ask that they stop listening in on all our communications; to imagine a society where street art is respected.

If we want change, we have to make it impossible for the oppressors to continue oppressing, for the exploiters to keep exploiting, and for the killers to go on killing.

They must learn there will be a steep price to pay for their crimes and that price will progressively escalate until the carnage concludes.