'Activism': The lies we have to tell ourselves | Mickey Z. 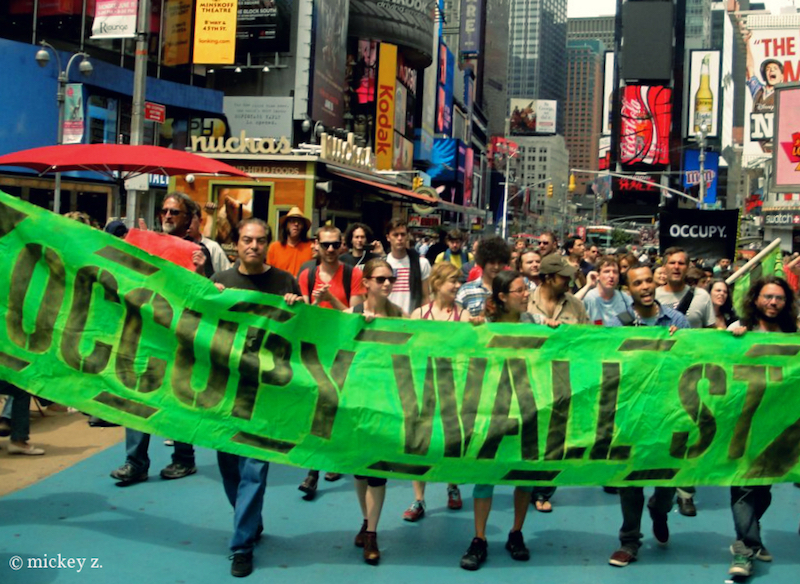 Almost exactly four years ago, I wrote an article that opened with this, um, “anecdote”:

As part of the Occupy Wall Street (OWS) Summer Disobedience School, I was marching with my fellow occupiers through Times Square in early June 2012. While skirting the edge of the demo to take photos, I passed a group of young men in business attire. On the surface, they appeared "mainstream" -- right out of Central Casting, in fact.

One man was clearly confused by the boisterous march -- the signs, the drummers, the costumes, and so much more. "What are they doing?" he pondered aloud. The largest man in the group -- his face pinched into an expression of scorn -- bellowed: "I'll tell you what they should be doing. They should be looking for a fuckin' job."

He looked so self-satisfied with his parroting of the corporate media line that I couldn't help taking him down a notch. I stopped walking, positioned myself about three feet away -- directly in his line of sight -- and glared into his eyes.

When he looked at me and saw my "99%" button and the Red Square affixed to my t-shirt, Alpha Male was suddenly confronted with the uncomfortable reality that those he was mocking weren't the skinny hippie pacifists he'd read all about on the interwebs.

His eyes met mine and I held my squinty stare. In a matter of seconds, his self-confidence waned and he diverted his gaze downwards. (#winning) With a smirk, I turned and moved off to catch up with my OWS tribe.

Pardon me while I curl into the fetal position and weep in shame for the next three hours.

I can still recall how unabashedly excited I was to participate in the event described above (and so many others like it) but now -- armed with four-plus years of painful but essential hindsight -- it makes me cringe that my exuberance tricked me into thinking we were doing anything even remotely effective or “making a difference.”

Before I can allow myself to simply look back with a sense of nostalgia at a fun afternoon with some upbeat folks who, um, occupied my life for a brief moment in time, I must first expose, address, and own up to the arrogance and denial on display that afternoon.

What we were doing…
I’ve already wasted enough ink on the “get a job” canard so let’s instead focus on the extreme validity of the first dude-bro’s question: “What are they doing?” Think about it. Why wouldn’t he or anyone be puzzled? There was literally no rational reason why passers-by would understand the show we were putting on for ourselves (and the cops).

If you asked me “What are you doing?” at the time, I likely would’ve spouted off a whole lot of nonsense about “revolution.” Ask me now though. Please. Ask me now about OWS and its various spin-offs and spectacles.

Even better, if I could somehow track down the guy who confusedly wondered what we were doing that Saturday afternoon in Times Square four summers ago, here’s some of what I’d tell him:

We were entertaining ourselves. Mic checks, hand signals, carefully crafted performances, a ridiculous overemphasis on “outsmarting” the “pigs,” and virtually no perception of or interest in what might potentially lure in mainstream New Yorkers. This counterproductive tendency to perform for each other progressed rapidly and virtually guaranteed failure.

We were doing in ZERO outreach. I can remember commenting on how curious and interested the tourists in Times Square appeared to be about us and the issues we were raising. What the fuck was I thinking? Of course they watched and took photos and videos. That’s what tourists do! They weren’t becoming “woke af.” Just the other day, while standing near the entrance to Bryant Park, I witnessed two homeless men in a screaming match that almost became violent. Glancing around, I saw tourists staring at them and filming them with the exact same facial expressions as those watching my “OWS Tribe” in the exact same spot four years earlier.

We were engaging in the classic “take the streets” nonsense. It takes an incredible amount of denial and privilege for a mostly white crowd of “activists” to taunt cops, disobey street-related laws, and perceive such silliness as rebellion. Meanwhile, on the same day described above, when the march reached Bryant Park, the NYPD predictably singled out a black man from the crowd. He was stopped and frisked right in front of us. We chanted and took photos and “showed our solidarity” with people of color and when he was let go without being arrested, we also managed to convince ourselves that somehow, his freedom was thanks to the presence of OWS. (insert deep sigh here) 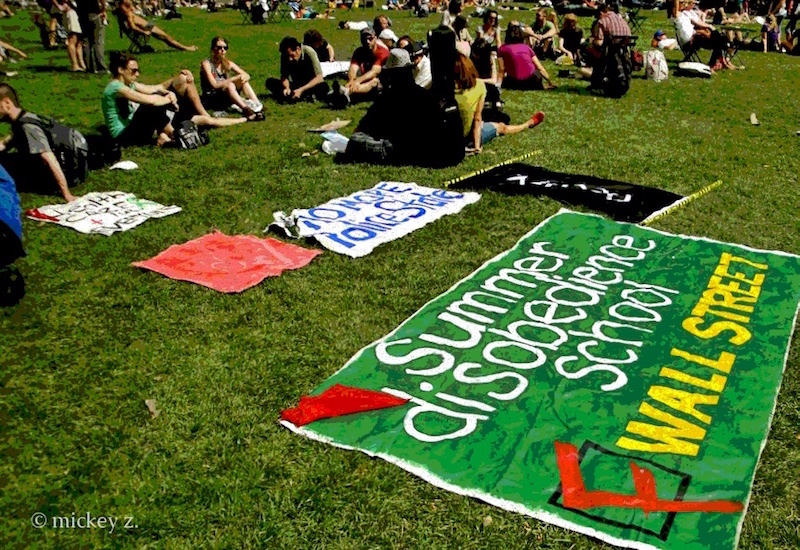 We were congratulating ourselves afterwards. Once inside Bryant Park, the “occupiers” broke into small groups to analyze that day’s event and discuss “important issues” (student debt, radical theory, and yes: stop and frisk!) -- as if anything we were doing could have even an iota of impact beyond our echo chamber. Meanwhile, a different set of on-lookers took photos of what must’ve appeared as a freak show.

We were partaking in a social media ego-fest. I don’t have a smart phone but many, many others were uploading images and videos in “real time,” all day. Later, folks like me got busy posting photos and videos, tagging, sharing, and creating yet another insular circle jerk of delusion. #winning!

We were wasting our own precious time and energy. As I documented in this article, despite all the smoke and mirrors, nothing of sustained value has been accomplished by OWS and its offshoots since September 17, 2011. Really. Please. READ THIS ARTICLE. For now, I’ll offer a snippet:

“The damage is relentless and ongoing and impervious to Occupy-related tactics and self-perception. None of our exhibitionist acting out or our Instagram selfies or our clever memes or our accumulation of social media notifications or our sign waving and petition signing and drum banging got us any closer to the root causes and certainly no where near to creating sustainable social change.”

“What are they doing?” that bewildered bro begged. Since it would be far too flattering to simply say “nothing” (“worse than nothing” = way more accurate), please allow me to amend the cringeworthy recollection with which I began:

One man was clearly confused by the boisterous march -- the signs, the drummers, the costumes, and so much more. "What are they doing?" he pondered aloud. So, I stopped walking, positioned myself about three feet away -- directly in his line of sight -- and replied: “We’re doing what ‘activists’ do, of course. We’re willfully lying to ourselves. What does it look like we’re doing?”

Repeat after me: The people united will never be defeated!

Mickey Z. is currently writing his fourteenth book, How to Lose Friends & Influence Nobody: My Life as an “Activist.” In the meantime, he can be found here.

“Activism”: The lies we have to tell ourselves by Mickey Z. is licensed under a Creative Commons Attribution-ShareAlike 4.0 International License.
Based on a work at http://worldnewstrust.com/activism-the-lies-we-have-to-tell-ourselves-mickey-z.