Activism is a Job! | Mickey Z. 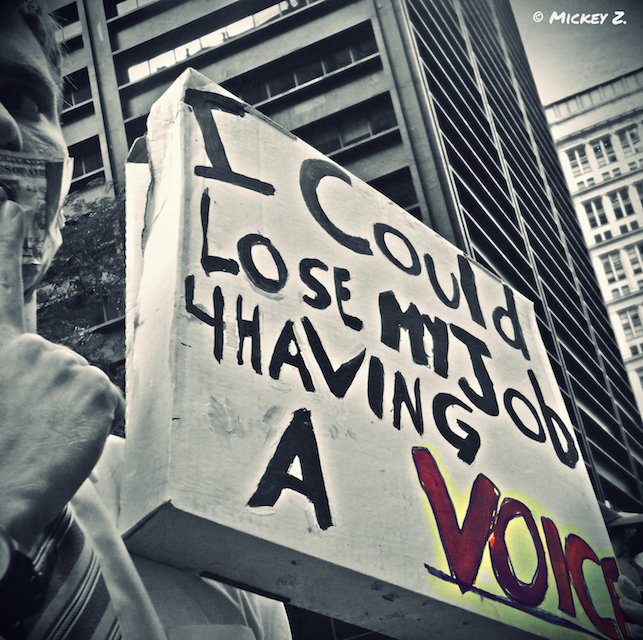 (The following is an edited excerpt from Occupy this Book: Mickey Z. on Activism, which can be ordered here.)

It’s a rite of passage for all activist movements. When you’ve made enough of an impact and made your presence felt in big enough and consistent enough numbers, you’re gonna start hearing passersby (usually white men) contemptuously scream out to you on the street and in comment threads all across the interwebs:

As I witness this happening more and more at NYC #BlackLivesMatter (BLM) rallies, I figured it was time to once again share some thoughts from Occupy this Book: Mickey Z. on Activism.

A Different Kind of Job Interview
I was skirting the fringes of a BLM March near Times Square, taking photos, when I heard indignant passers-by yell in our direction: “Get a job!” If only I could sit them (and so many others) down and pose a few questions…

Firstly, the most obvious: How do you know which of us does or doesn't have a job? Many activists balance a wide range of responsibilities in order to be present at such actions. This assumption that we're all jobless is based almost solely on corporate media propaganda and the intense social conditioning that "productive" people simply "don't have the time" to engage in nonsense like, say, working to save lives.

Another question: What does it say about our culture that having a job is one of the primary barometers of "success"? Of course, by "job" most people mean any paid position that is respected by society's current standards and affords said employee enough money to engage in conspicuous consumption, thus further raising their status within a culture hypnotized by materialism. (This perspective, of course, is ableist as many radical, dedicated activists are “disabled” and thus pushed outside of not only the mainstream “job” worship but much of the leftist “worker” worship.)

Question #3: Are you aware that part of what inspires many activists is a rejection of the destructive and alienating work-consume-obey model of human culture? In choosing the "get a job" tack, critics ironically and/or conveniently ignore the economic and social issues that provoke protests while tacitly offering support for maintaining a rigged system based on rampant inequality, privilege, and misinformation.

Going bigger picture here: Exactly what job would you suggest for a socially aware and compassionate human? The global economic system is based on perpetual growth and the relentless exploitation of what we've come to call "natural resources." By definition, such an approach is unsustainable and cannot be reformed. Thus, almost all jobs within such a lethal system directly or indirectly contribute to the looming ecocide.

Staying with the holistic perspective: Why do you choose to aim your anger and fear at a random protestor you believe may not have a job rather than at the global criminals responsible for consuming, poisoning, and killing our shared landbase and thus, threatening our future?

Clocking In
At a very recent BLM event, I crossed paths with my good friend Richie (someone I met via Occupy Wall Street) and I’d like to share something he said.

When discussing how we felt about the specific action planned for that night, Richie declared (and I’m paraphrasing): “I’m here, kinda low profile, tonight. No sign. Not getting loud. I’m clocking in. I’m an activist. This is what I do.”

As they say in South Florida: BINGO.

BLM/OWS/activism/dissent -- none of it is about waiting for the ideal time to jump on board. It's about revolution -- in the name of all life on earth -- so shrug off the excuses, get involved, clock in, and do your job.

Activism is a Job! by Mickey Z. is licensed under a Creative Commons Attribution-ShareAlike 4.0 International License.

Based on a work at https://worldnewstrust.com/activism-is-a-job-mickey-z.