Activism Could Make A Difference If Protestors Would Abandon Obsolete Tactics | Mickey Z.

As I scanned reports of the latest spasms of anti-racist protests and police brutality, I promised myself I’d resist writing any articles about it. After all, how many activism-related articles have I already written? But…

All activists should and must find other ways to protest conditions and cultivate change. Dissent is not a dichotomy. It’s not limited to a few obsolete options. Dissidents must step out of the archaic box, open their minds to fresh perspectives, and discover methods and approaches that will finally net sustainable results. And while you’re at it: Rather than looking for ways to protest that keep you safe from criticism, the objective should be getting closer to your concept of justice.

Each and every minute of each and every day, individual humans hit critical mass. For innumerable reasons, they reach the proverbial point-of-no-return, realize that they've been lied to since forever, and decide they want to toil in the name of creating change. They become activists.

However, there’s a very dogmatic and counterproductive template for activism in the United States and this endless wave of new energy is quickly gobbled up by existing groups/ideologies and funneled into the same old ineffective paradigm -- with the corporate media doing its damnedest to keep that self-sabotaging paradigm alive and well.

Variations exist but the “radical” hive mind reigns supreme. It cuts across all causes. Sure, it’s more pronounced in white males but the template is willfully embraced by the full gamut of activists. (Also, as recent events are demonstrating, the blueprint of resistance often serves as an ideal and convenient cover for violent males seeking to act out under the guise of being “woke,” but that ignored topic is an entire article in and of itself.)

For now, please allow me to introduce an example of the activist template in action…

It was June 17, 2012, and the scene was a silent march from Harlem to the Upper East Side to “protest” the NYPD policy of stop-and-frisk. Yeah, I know, why would anyone imagine a bunch of people walking quietly through Manhattan (led by one of the all-time fake “activists,” Al Sharpton) would do anything to provoke the NYPD to consider changing its policies? Don’t ask me. As a white male activist, I reflexively attended such mass gestures to virtue signal my sincere “ally-ship” and “intersectionality.”

When I wasn’t at the front of the parade taking photos (sample above), I marched with a group of people who still identified as Occupy Wall Street -- and one dude who was totally faking it. That dude was an undercover cop, Wojciech Braszczok. As we’d all learn later, he had smoothly “infiltrated” OWS and this news freaked out a bunch of occupiers. I guess some were completely naive as to how law enforcement works while others simply could not accept that such savvy revolutionaries as themselves could’ve ever been tricked by a mere “pig.”

In June 2012, however, Braszczok’s cover hadn’t yet been blown so he joined us dangerous (sic) subversives (sic) in the Stop Stop & Frisk charade. At one point, he noticed I had a small red felt square pinned to my bag. This was a popular form of virtue signaling that summer as the OWS crowd showed solidarity with students in Quebec, but 99% of people (see what I did there?) didn’t really understand why. Anyway, a red square also became a signatory of the “Strike Debt” movement (sic) ostensibly designed to “end” student debt. So, Officer Braszczok chatted me up to find out when and where the next Strike Debt demo would take place.

If this was a measure of Braszczok’s undercover skills, well, he was even more inept than we were! As I told him at the time, all the treasonous details of the Strike Debt March were readily available on the public Facebook event page. Why didn’t he and his superiors realize how silly it was to waste any resources tracking OWS when we presented as much threat to the system as the local Bernie Sanders fan club? But that’s the magic of “activism,” isn’t it? We rebels loyally follow the time-worn script and then pat ourselves on the back for being so badass that the “pigs” have no choice but to come after us.

Speaking of “pigs,” that silent march in summer 2012 ended when NYPD officers forced us away from then-mayor Michael Bloomberg’s townhouse onto a narrow side street where inevitably, tempers flared and the cops, well… they un-ironically roughed up, arrested, and basically stopped and frisked some people of color.

Let’s re-cap: Led by one-time FBI informant Al Sharpton, a large crowd of New Yorkers was engaging in a wholly symbolic and utterly ineffectual parade to announce both our disdain for stop-and-frisk and our lack of imagination and vision. On that day, a group of folks loosely affiliated with Occupy Wall Street seized on the opportunity to remind everyone that reports of our demise had been (allegedly) exaggerated. Embedded within this exhibitionist swarm of pseudo-subversives was an undercover cop who may or may not have believed that infiltrating OWS was worth his time but hey, it was Sunday and that means extra pay! Meanwhile, his overtime-collecting colleagues unselfconsciously engaged in the type of unaccountable behavior that was being “protested” in the first place.

Let’s update: Eight years later, stop-and-frisk still exists but the NYPD is now way better at disguising it (and for the record, my red felt square somehow did not stop student debt from escalating). 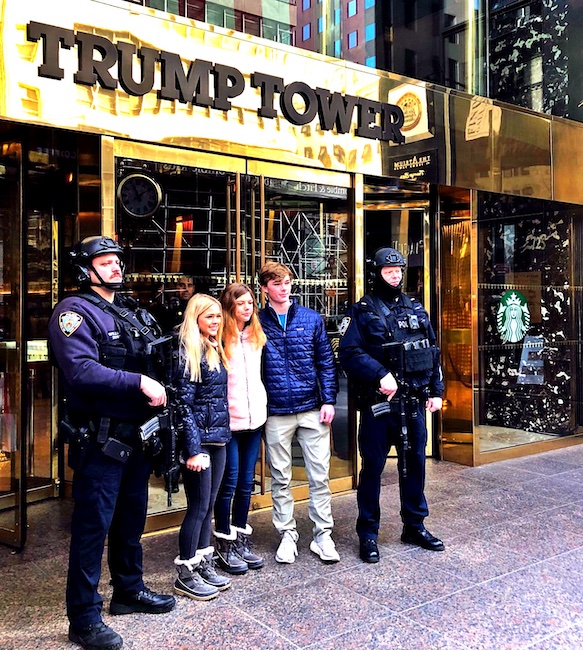 As stated above, I used to write about activism a lot. I believe I even offered some valuable advice on occasion. Predictably, there are those still clamoring for more “solutions” from yet another old white guy like me. Despite that tornado of cognitive dissonance, I will try to provide a productive example of “what we should do.” For that lesson, I’ll turn to a group infinitely more effective than anyone on the always-sign-holding, sometimes-window-smashing “left.”

In October 2006, none other than the FBI issued a warning that “White supremacist infiltration of law enforcement” represented a significant national threat. Multiple incidents (far too many to list here) had prompted the report, e.g.

The FBI warning was issued in 2006 but nothing has been done to address the threat. Meanwhile, from 2008 to 2014 alone, the overall number of known white supremacist groups in the United States rose from 149 to nearly 1,000. And then came Trump. Their infiltration of law enforcement continues, unchecked and virtually undiscussed. But not unfelt.

Picture this: Some time back in the late 20th century (who wants to bet it was during the Clinton years?), a group of powerful white men conjured up a master plan.

It may take quite some time, they surely realized, but they decided to begin methodically infiltrating law enforcement departments from sea to overfished sea. Start with lowly recruits now and within a decade or two, they’d rise to decision-making positions.

As their power grew, they could a) lure in returning military veterans and b) influence lawmakers to allocate funds for increasingly militarized equipment and weapons. By the time something really bad happened (read: a black president), they’d have enough sway to do things like control what information gets leaked and when.

Who knows? All this might even contribute to getting a powerful kindred spirit into the White House by, say, 2016. And if the rabble ever actually tried real dissent, well… they’d be faced with a heavily armed, heavily conditioned force of sociopathic racist males.

So, comrades… while we danced in turtle costumes in 1999 Seattle, the enemy patiently took over another police force and standardized authoritarian tactics like “designated free speech zones.”

While we gathered under the “Anybody-but-Bush” banner in 2004, more KKK types became sergeants, lieutenants, captains, inspectors, commissioners, and beyond.

While we argued with cops over arcane laws that may or may not “allow” us to sleep in tents in a downtown Manhattan park, they trained with law enforcement agencies in other countries -- including Israel -- while normalizing military-style weapons right here on our city streets.

While we marched behind celebrities in the name of fighting (sic) climate change, they ramped up surveillance and infiltrated “activist movements”… just in case.

And especially while we blocked traffic with our Black Lives Matter signs, they rose to positions like prosecutors, judges, and district attorneys to make sure justice would never be served.

Do we really wanna know what works when it comes to creating sustainable change? (Hint: It ain’t social media flame wars, "Blackout Tuesday," or more chants of “no justice, no peace.”)

Can we handle what it looks like have a coherent agenda and the patience to implement it?

Variations of this template exist, if we’d summon the courage and commitment to embrace them.

Pro Tip: Success leaves clues. Find them and learn from them.