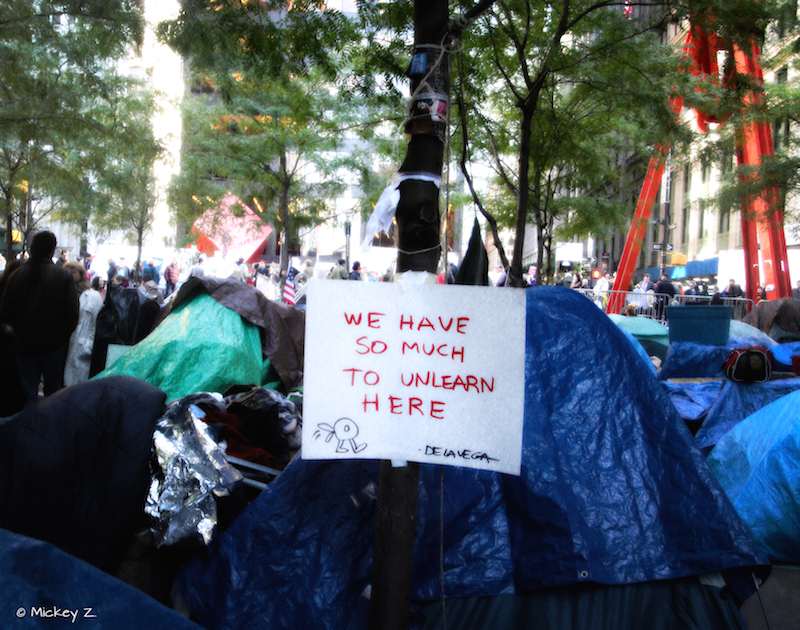 Way too many people imply that unless a critic expounds a specific strategy for implementing a new paradigm, their opinion is worthless.

This reaction ignores the essential role critical analysis plays in a society where problems --- and their causes -- are so cleverly disguised. When discussing the future, the first step is often an identification and demystification of the past and present.

I’ve written and spoken words like this many, many times. The audience I’ve aimed for was made up of those yet to embrace any form of protest. I was coaxing, pleading, cajoling anyone within earshot to stop seeking excuses to avoid joining the struggle. I still am.

However, more and more, I find myself directing such sentiments towards my fellow activists. Mired in archaic tactics, counterproductive single-issueism, fear-driven stagnancy, and ego-driven inertia, the realm of dissent is a minefield for anyone seeking or suggesting new ideas, fresh perspectives, broader coalitions.

No one fears change more, it seems, than those ostensibly struggling for change. If you don’t believe me, go ahead and try getting the activists you know to consider a new approach.

To question tactics is reflexively perceived as a counterproductive attack. To introduce the idea of solidarity with other groups and issues is to invite an accusation of co-optation. To suggest a re-evaluation of any kind is deemed an unforgivable betrayal.

To point out the very obvious fact that we -- as activists and as earthlings -- are losing, with no hint of imminent reversal, is to exile oneself from one’s activism circle.

Reality check: The issues and factors that splinter communities in the general population -- privilege, propaganda, ego, fear, and so on -- very much exist within the activist world.

These factors lead us to stalemates, in-fighting, schisms, and thus: failure. Unless we accept the challenge to completely re-imagine our modes of dissent, we’ll remain on the same path. We’ll remain, hurtling at warp speed, towards economic, social, and environmental collapse.

What should we be doing? Outside of encouraging broader and broader intersectionality and coalitions, I don’t know.

What I do know is this: What we are doing -- the tactics and methods we so passionately cling to and defend -- don’t work and some have never worked.

There’s no shame in admitting we could’ve done better… much better. But even if there is shame, why must we let it outweigh the task at hand?

If we truly want drastic and sustainable social change, all the protest sign wavers, social media warriors, arrest compilers, obsessive meeting holders, under- and over-organized organizers, and relentless spotlight seekers must join together to destroy the old blueprint.

Step 1: Smash the activism archetype, including its foundation.
Step 2: Rebuild a flexible structure under the guidance of new architects and artisans.

Activism = Appetite for Destruction by Mickey Z. is licensed under a Creative Commons Attribution-ShareAlike 4.0 International License.
Based on a work at http://worldnewstrust.com/activism-appetite-for-destruction-mickey-z.