Action (and Organizing) is Better Than Hope | Mickey Z. 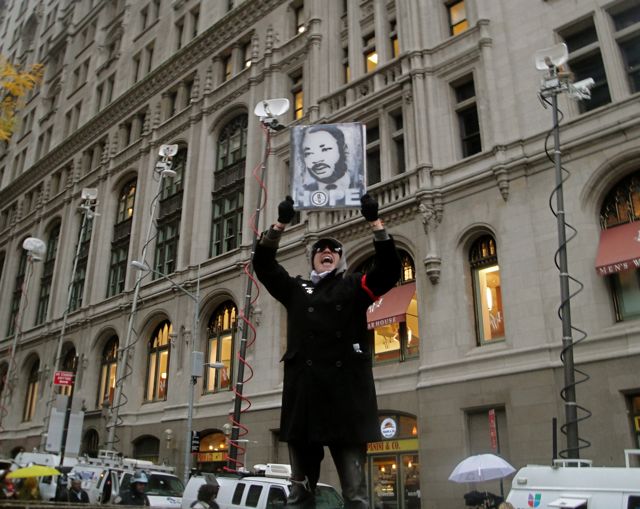 “When the situation is hopeless, there's nothing to worry about.”

"If we lose hope, nothing will ever change"… or so they believe.

Barack Obama promised hope but what we got was more illegal military interventions, targeted assassinations of U.S. citizens, prosecutions of whistleblowers, widespread domestic surveillance, and laws that allow the U.S. to indefinitely detain suspects anywhere in the world without charge or trial.

The corporations raping our eco-system don’t hope they can steal more land, exploit it, despoil it, and make boatloads of cash off of it. They make a plan and they make it happen. (You might even call it "direct action.")

Barack Obama promised hope but what we got was more off-shore drilling, fracking, tar sands pipelines, and spurious sonnets to nuclear power and clean (sic) coal.

Monsanto doesn’t put its faith in candlelight vigils or humans standing in the shape of a peace sign, I mean… dollar sign. They get busy putting their people into positions of power, writing legislation, and bullying and smashing anyone opposed to their ecocidal agenda. Hope isn’t part of their game plan.

Barack Obama promised hope but chose instead to bail out billionaires while 2,660 children are born into poverty each day in the United States.

Exxon-Mobil doesn’t reserve its opinions for government sanctioned “free speech zones.” Television, Internet, magazines, movies, songs, radio, etc. are all inundated with their taxpayer-subsidized propaganda… just as the planet is inundated with their lethal output. No hope, just action.

Barack Obama promised hope but yet we still have the PATRIOT Act, the prison at Guantanamo Bay, and Dubya's rendition program.

The verb “hope” is virtually synonymous with “pray,” while “hope” the noun is often interchangeable with “faith.” Neither of these concepts directly points anyone towards action, do they?

Suggestion: Trade in all that hope for some good old-fashioned anger and passion.

Henry Miller sez: “Hope is a bad thing … It means that you entertain illusions. It’s a sort of spiritual clap, I should say.”

With rebellion rising all across the planet, let’s combine outrage with outreach and join the revolution. Let’s ditch hope and aim instead for vision, clarity, strategy, courage, creativity, solidarity, and finally: some goddamned results.

Nietzsche sez: “Hope is the worst of evils, for it prolongs the torments of man.”

It’s not enough to hope the powers-that-be stop gunning down young black men, to hope they stop poisoning our food, to hope they stop listening in on all our communications; if we want change, we have to make it impossible for the oppressors to continue oppressing, for the exploiters to keep exploiting, and for the killers to go on killing.

They must learn there will be a steep price to pay for their crimes and that price will progressively escalate until the carnage concludes.

Take-home message: No matter what bullshit you hear from Wall Street-funded, ecocide-perpetrating war criminals, remember this: Action is always better than hope.