A World Without Tigers? | Mickey Z. 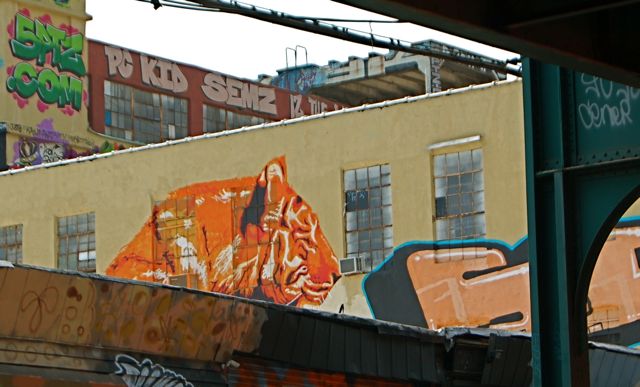 “A world without huge regions of total wilderness would be a cage; a world without lions and tigers and vultures and snakes and elk and bison would be -- will be -- a human zoo. A high-tech slum.”

The name “tiger” -- assigned by humans to the largest species of the cat family -- is derived from the Greek word tigris, which in turn, is a derivative of the Persian word for arrow. Since a running tiger can reach velocities of 35-40 mph, “arrow” most likely refers to such speed.

Will knowing any of this make you appreciate tigers more?

What if I told you how most tigers have over 100 stripes and the stripe patterns are unique to each animal -- like a human's fingerprints?

Would it make you less likely to spend your money at a roadside zoo?

How about if I wowed you with the fact that a tiger’s striped pattern is also found on its skin? All you’d have to do is shave a tiger to find out.

Will such info inspire you to take action to protect this majestic creature? Protect?

A beast that weighs up to 720 pounds, stretches to six feet in length, can swim up to four miles, leap a distance of 10 meters, and has night vision six times stronger than that of a human -- and it needs us to protect it?

Maybe this factoid will explain -- and provoke: There are currently more tigers living in captivity in the United States (mostly in roadside zoos) than tigers existing in the wild across the entire globe.

The Animal-Prison/Industrial Complex
For context, here’s a little of what typically is ignored about zoos:

On the road…
As nightmarish as large zoos and “wildlife centers” inherently are, America’s ubiquitous roadside zoos aren’t even accredited by the Association of Zoos and Aquariums (AZA).

There are roughly 200 or so roadside zoos in the United States -- attracting some 135 million humans per year. When you factor in safari parks, circuses, breeders, dealers, and other exhibitors technically "licensed and inspected" by the USDA, the number reaches about 2,500. But, as the ALF explains, "weak federal regulations and a crazy-quilt pattern of local and state wildlife laws" make it possible for "virtually anyone can obtain a permit to exhibit, breed, and sell exotics; no qualifications are required."

One illustrative example is the Wild Wilderness Drive-Through Safari in Gentry, Ariz., which, as environmental writer Sara Wittenberg explains, “reportedly feeds its animals expired Little Debbie snack cakes it receives for free from a nearby plant; additionally, visitors may bring whatever snacks they would like to feed the animals. Monkeys throw dead cage-mates around while visitors watch, some in horror, some more amused; many residents are housed in wire-bottom cages whose mesh is too large to accommodate their feet so that they fall through the bottom just moving around their enclosures.”

The folks at Tigers in America add: “A roadside zoo can be 20 animals in adjacent pens or a single tiger in a cage. What these facilities have in common are barren cages, inadequate food, water, shelter, and veterinary care. The animals are often crowded into conflict-prone groupings. A declawed tiger in a cage with tigers with claws cannot fight for food or defend itself.”

Consider the tiger commonly known as “Tony the Truck Stop Tiger.” One of the many large cats born over the past 20 years at the Tiger Truck Stop on Interstate 10 in Louisiana, Tony “has spent his entire life in this cell breathing diesel fumes 24 hours a day for the amusement of customers that stop for fuel.”

An extremely wide range of captive “exotic” species are abused and exploited in these specious establishments and such abuse is funded by those of us who visit roadside zoos.

Serious solution: A collective dismantling and re-imagining of all aspects of the dominant human culture.

Extinction is forever
Humans are just one of 8.7 million species sharing (sic) a planet. Whether you call it a cage, a cell, a jail, a pen, a ward, a prison, a wildlife center, or an enclosure, captivity is captivity. A culture that confines and abuses animals for profit is highly likely to regularly promote and engage in other forms of violence and exploitation.

With all that in mind, two more tiger factoids to consider:

I don’t wanna live on a planet without tigers. Do you?

Surrender the privilege of speciesism, embrace empathy for all sentient beings, re-imagine your relationship with the natural world, and allow revolutionary compassion to guide your choices.

Do it for the tigers…