A Ship of Fools | Emanuele Corso 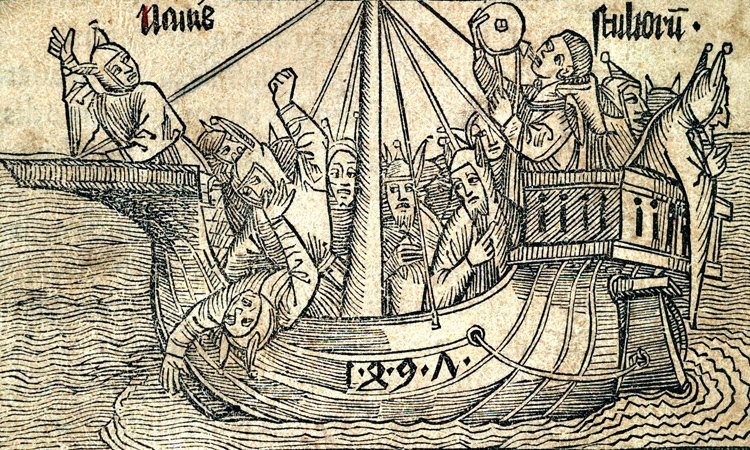 Woodcut by an unknown artist. Illustration from the book Stultifera navis (Ship of Fools) by Sebastian Brant, published by Johann Bergmann in Basel in 1498. Credit: University of Houston Digital Library.

A Ship of Fools is adrift.

The crew is filling the sails with lies, ignorance, and innuendo fueled by religiosity, ignorance, racism, resentment, mysogny, homophobia, hate speech, class discrimination, ethnicity, fear, distrust of government, disparagement of anyone and everyone not like them, and not the least, unbridled political ambition funded by billionaires. No person, no institution, is safe from their depredations, not even the sitting president.

Fear of truth also fuels this taxonomy of disfunction, deception, and destruction. To wit:

The Ship’s Crew at Work

The foregoing of course isn’t the entire crew roster and certainly not the entire story, but it does illustrate where our present course is leading as we sail into the future of this society, this country.  That we have spent nearly $1 trillion on one fighter aircraft that has yet to be cleared for use after at least 10 years of development -- while education, roads, water supplies, and health care languish -- is testimony to our values as a nation, as a people.

That we have been involved in one war or another for 222 years out of the 239 years since 1776 itself speaks more about our values as a  society than all of our rhetoric. War making and war machines have taken precedence over our development as a civilized people. This seems to me to be an unspeakable travesty of what we, as a nation, represent ourselves as being.

Even education has been transformed from a national treasure into a target. Politicians with no experience or background in education are pushing destructive educational policies like endless meaningless testing and third grade retention for kids who aren’t learning to read on a phony political schedule, all in service to political contributors who are already profiting from privatized public education. Is it paranoid to suggest an uneducated or poorly educated public would be far easier to manipulate and control and, aside from profit, isn’t that what makes this an attractive strategy for some?

What kind of world do these people envision in the aftermath of their attacks on the social contract? What kind of country will this be when people are without health care, without education, without roofs over their heads, without food, without employment at living wages? Are they imagining with some kind of satisfaction soup kitchens and bread lines? Is this the path they and their politician accomplices are planning to follow to achieve “American Exceptionalism?”

We struggle constantly with the ancient hierarchical social belief system in which some are always “better” than others by virtue of an accident of birth, race, ethnicity, gender, religion, or any other quality with which they sort the polity. People who operate at this low level of socialization seem incapable of perceiving or admitting to the simple existence of “others,” to respect others, as when an elected official (South Carolina state senator Tom Corbin) publicly characterizes women as "a lesser cut of meat.”

Where are we going with all of this? That is the most important question we are compelled to ask and demand answers to from everyone including ourselves personally. Our fate as a society is at stake. Our fate as a civilization is in peril sailing on as we are with a seriously defective moral compass.

Emanuele Corso, "looking like an old Sicilian," with "genius cat" Sheba.Emanuele Corso’s essays on politics, education, and the social contract have been published at NMPolitics, Light of New Mexico, Grassroots Press, Nation of Change, WorldNewsTrust.com and his own website: siteseven.net. He taught Schools and Society at the University of Wisconsin-Madison where he took his PhD in Educational Policy Studies. His BS was in Mathematics. He is a veteran of the U.S. Air Force’s Strategic Air Command where he served as a Combat Crew Officer during the Cuban Missile Crisis. He has been a member of both the Carpenters, Joiners and IATSE (theatrical) labor unions and is retired from IATSE. He is presently working on a book: Belief Systems and the Social Contract.