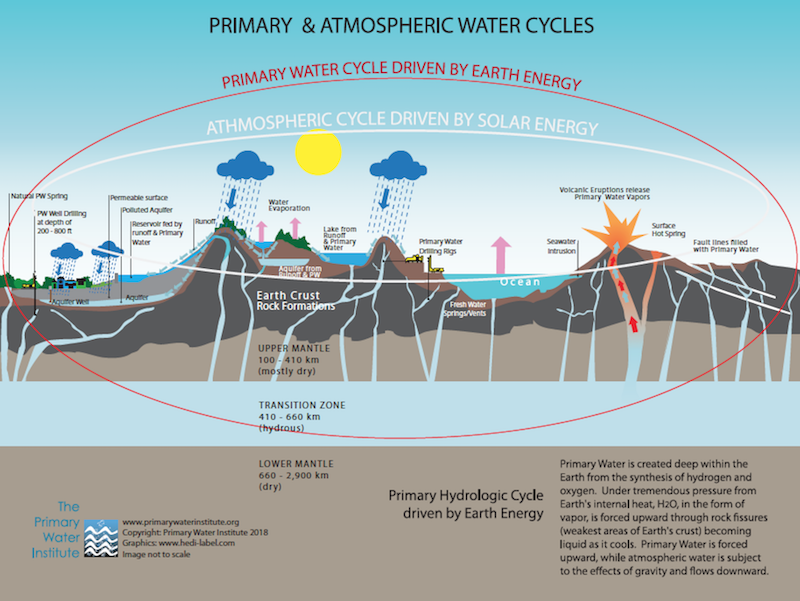 Oceans of water are beneath our feet, and new technologies are extracting it economically without ecological damage.

According to the United Nations, some 800 million people are without clean water, and 40 percent of the world’s population is impacted by drought.

By one measure, almost 100 percent of the Western United States is currently in drought, setting an all-time 122-year record.

The ideal solution would be new water flows to add to the hydrologic cycle, and promising new scientific discoveries and technologies are holding out that possibility.

But mainstream geologists have long contended that water is a fixed, non-renewable resource; and vested interests are happy to profit from that limiting proposition. Declaring water “the new oil,” an investor class of “Water Barons” -- including wealthy billionaire tycoons, megabanks, mega-funds and investment powerhouses -- has cornered the market by buying up water rights and water infrastructure everywhere. As Jo-Shing Yang, author of “Solving Global Water Crises,” wrote in a 2012 article titled “The New ‘Water Barons’: Wall Street Mega-Banks are Buying up the World’s Water”:

Facing offers of millions of dollars in cash from Goldman Sachs, JPMorgan Chase, Citigroup, UBS, and other elite banks for their utilities and other infrastructure and municipal services, cities and states will find it extremely difficult to refuse these privatization offers.

For developing countries, the World Bank has in some cases made water privatization a condition of getting a loan.

Geologists say that all of the water on Earth, including the atmosphere, oceans, surface water and groundwater, participates in the natural system called the “hydrologic cycle,” a closed circuit in which water moves from the surface to the atmosphere and back again. Rainwater falls, becoming groundwater which collects in aquifers (underground layers of porous rock or sand), emerging as rivers and lakes, and evaporating into clouds to again become rain. New water called “juvenile water” may be added through volcanic activities, but this addition is considered to be negligible.

The most widely held theory is that water arrived on the planet from comets or asteroids, since any water on Earth when it was first formed would have evaporated in the intense heat of its early atmosphere. One problem with that theory is that comet water is different from Earth water. It has a higher ratio of deuterium (“heavy water” with an extra neutron in it). Asteroids, too, are not a good fit for Earth’s water.

A more likely theory gaining new attention is that Earth’s water comes largely from within. Minerals containing hydrogen and oxygen outgas water vapor (H2O) under intense pressure and heat from the lower mantle (the layer between Earth’s thin crust and its hot core). Water emerges as steam and seeps outward under the centrifugal force of the spinning earth toward the crust, where it cools and seeps up through the fractured rock formations of the crust and the upper mantle.

Studies over the past two decades have found evidence of several oceans’ worth of water locked up in rock as far down as 1,000 kilometers, challenging the assumption that water arrived from space after  Earth’s formation. A study reported in January 2017 based on isotopes from meteorites and the mantle found that water is unlikely to have arrived on icy comets after Earth formed.

Another study, reported in New Scientist the same month, showed that Earth’s huge store of water may have originated via chemical reactions in the mantle rather than coming from space. The researchers ran a computer simulation of reactions between liquid hydrogen and quartz in Earth’s upper mantle. The simulation showed that water forms within quartz but then cannot escape, so the pressure builds up – to such high levels that it could induce deep earthquakes. Rather than hydrogen bonding into the quartz crystal structure, as the researchers expected, it was found to disrupt the structure by bonding with oxygen. When the rock melts under intense heat, the water is released, forming water-rich regions below Earth’s surface. The researchers said that water formed in the mantle could reach the surface in various ways -- for example via magma in the form of volcanic activity -- and that water could still be being created deep inside the Earth today. If so, that means water is a renewable resource.

The challenge is drawing this deep water to the surface, but there are many verified cases of mountaintop wells that have gushed water for decades in arid lands. This water, which could not have come from the rainwater of the conventional hydrologic cycle, is variously called “deep-seated,” “juvenile” or “primary” water. It is now being located and tapped by enterprising hydrogeologists using technological innovations like those used in other extractive industries – but without their destructive impact on the environment.

According to Mark Burr, CEO of Primary Water Technologies,  these innovations include mapping techniques using GIS layering and 3-D modeling, satellite imagery and other sophisticated geophysical data collection; radiometrics, passive seismics, advanced resistivity and even quantum physics. A video capturing one of his successful drills at Chekshani Cliffs, Utah, and the innovative techniques used to pinpoint where to drill, can be seen here.

Burr comments that locating “primary water” does not require drilling down thousands of feet. He says that globally, thousands of primary water wells have been successfully drilled; and for most of them, flowing water was tapped at less than 400 feet. It is forced up from below through fissures in the Earth. What is new are the innovative technologies now being used to pinpoint where those fissures are.

The developments, he says, mirror those in the U.S. oil and gas industry, which went from cries of “Peak Oil” deficiency to an oil and gas glut in less than a decade. Dominated for 40 years by a foreign OPEC cartel, the oil industry was disrupted through a combination of scientific advancements (including recognition of abiotic oil and gas formations), technological innovation, and regulatory modernization. The same transformation is under way in water exploration and production.

These developments were pioneered in the U.S. by Burr’s mentors, led by Bavarian-born mining engineer and geologist Stephen Riess of San Diego. Riess drilled over 800 wells around the world before his death in 1985 and was featured in several books, including “New Water for a Thirsty World” (1960) by Dr. Michael Salzman, professor of economics at the University of Southern California.

Partnering with Riess until his death was Hungarian-born hydrogeologist Pal Pauer, founder of the Primary Water Institute based in Ojai, California. Pauer has also successfully located and drilled over 1,000 primary water wells worldwide, including over 500 in East Africa. One noteworthy well was drilled high on the top of a mountain in Kenya at Ngu-Nyumu, captured in a short video here. The workers drilled through rock and hit water at 300 feet, pumping at 15-30 gallons per minute. The flow, which is now being captured in a water tank, is still serving hundreds of villagers who were previously hauling water from heavily infested streams in jugs balanced on their heads.

Another remarkable mountaintop project overseen by Pauer involved two wells drilled at a 6,000 foot elevation in the Tehachapi Mountains in California. The drill first hit water at 35 feet. The 7-inch diameter borehole proceeded to eject water at a rate estimated to be over 800 gallons per minute. The event is captured on YouTube here.

Like California, Australia is an arid land with chronic water problems. An Australian company called Sustainable Water Solutions (SWS), a partner of Burr’s Primary Water Technologies, was featured on a local TV news program here. A video of one of SWS’s successful case studies detailing its methodologies is here.

A rival company is Australian-based AquaterreX Deep Seated Water Technology. According to its website, AquaterreX is an international enterprise employing  geology, environmental and earth sciences with a range of proprietary methodologies to identify and analyze geologic, hydrologic, atmospheric, and other data to locate reliable sources of Deep Seated Water with nearly 100 percent accuracy. Some of the company’s results are shown in a video which describes “deep-seated water” as being stored in a deeper layer of aquifers below those of the conventional hydrologic cycle.

Fresh Water Is Ubiquitous and Renewable

What these researchers call “primary water” or “deep seated water” is classified by the National Ground Water Association (NGWA) simply as a form of “groundwater,” since it is in the ground. But whatever it is called, these newly tapped flows have not been part of the hydrologic cycle for at least the last century. This is shown on testing by the lack of the environmental contaminants found in the hydrologic water cycle. From the time when atomic testing began in the Pacific, hydrologic water has contained traces of tritium, a radioactive isotope of hydrogen used as a fuel in thermonuclear bombs. Primary water shoots up tritium-free --clean, fresh and usually drinkable without filtration.

The latest NGWA fact sheet explicitly confirms that water is a renewable resource. It states:

In some states, such as Texas,  property owners have the right to capture the water beneath their property  (called the “Rule of Capture”), but this is not true in other states. California, for example, has a complicated system of regulation requiring costly and laborious permits. Granting property owners the right to drill wells on their own property, particularly where the water has been tested and shown to be “deep” or “primary water,” could be a major step toward turning water scarcity into abundance.

According to the American Society of Civil Engineers, the U.S. needs over $500 billion in infrastructure investment just for drinking water, wastewater, stormwater and dams. But legislators at both federal and state levels have been slow to respond, chiefly due to budget constraints. One proposal is a National Infrastructure Bank (HR 3339) constructed on the model of Franklin Roosevelt’s Reconstruction Finance Corporation (discussed in my earlier article here). When allocating funds for water usage, however, policymakers would do well to consider investing in “primary water” wells.

Tapping into local deep water sources not only can help ease pressures on debt-strapped public treasuries but can bypass the Water Barons and relieve territorial tensions over water rights. Water sovereignty is a critical prerequisite to food sovereignty and to national and regional independence. As noted in a recent Water Today article, quoting James D’Arezzo:

“The fact is, we do not have to severely restrict water usage, if we leverage all the tools at our disposal. There is plenty of water available on the planet and we now know how to find it. We also have newer best practices that can make a dramatic difference in total usage…. If we start acting now, in a short time the headlines about ‘water restrictions’ and grotesque pictures of dead animals and starving children can be replaced with headlines about more food production, smarter use of water and less conflict.”

This article was first posted on ScheerPost. Ellen Brown is an attorney, chair of the Public Banking Institute, and author of thirteen books including Web of Debt, The Public Bank Solution, and Banking on the People: Democratizing Money in the Digital Age.  She also co-hosts a radio program on PRN.FM called “It’s Our Money.” Her 300+ blog articles are posted at EllenBrown.com.