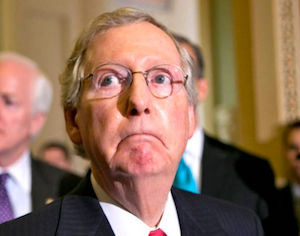 Mitch McConnell“If the US has someone whom historians will look back on as the gravedigger of American democracy, it is Mitch McConnell.”

Oct. 5, 2018 (Vox.com) -- Usually, comparisons between Donald Trump’s America and Nazi Germany come from cranks and internet trolls. But a new essay in the New York Review of Books pointing out “troubling similarities” between the 1930s and today is different: It’s written by Christopher Browning, one of America’s most eminent and well-respected historians of the Holocaust. In it, he warns that democracy here is under serious threat, in the way that German democracy was prior to Hitler’s rise — and really could topple altogether.

Browning, a professor emeritus at the University of North Carolina, specializes in the origins and operation of Nazi genocide. His 1992 book Ordinary Men, a close examination of how an otherwise unremarkable German police battalion evolved into an instrument of mass slaughter, is widely seen as one of the defining works on how typical Germans became complicit in Nazi atrocities.

So when Browning makes comparisons between the rise of Hitler and our current historical period, this isn’t some keyboard warrior spouting off. It is one of the most knowledgeable people on Nazism alive using his expertise to sound the alarm as to what he sees as an existential threat to American democracy.

Browning’s essay covers many topics, ranging from Trump’s “America First” foreign policy — a phrase most closely associated with a group of prewar American Nazi sympathizers — to the role of Fox News as a kind of privatized state propaganda office. But the most interesting part of his argument is the comparison between Senate Majority Leader Mitch McConnell and Paul von Hindenburg, the German leader who ultimately handed power over to Hitler. Here’s how Browning summarizes the history: