Rose DeWitt Bukater Dawson Calvert is a pretty nuanced female character by Hollywood standards (for 1997 or at any time). Written by a man, no less. Throughout Titanic, she has a palpable character arc. Ironically, it is her love interests who seem mostly one-dimensional. Caledon “Cal” Nathan Hockley is your garden variety villain. Jack Dawson is essentially a manic pixie dream boy. Neither man changes much over the three hours and 30 minutes of film time.

But Rose… she lives to (at least) 102 and demonstrates many exceptional qualities along the way. Besides the obvious lessons she provides about independent thought and rebellion (especially for a woman in 1912), Rose also does some meaningful but subtle role modeling. To follow are three hidden messages from one of the most iconic characters in film history. 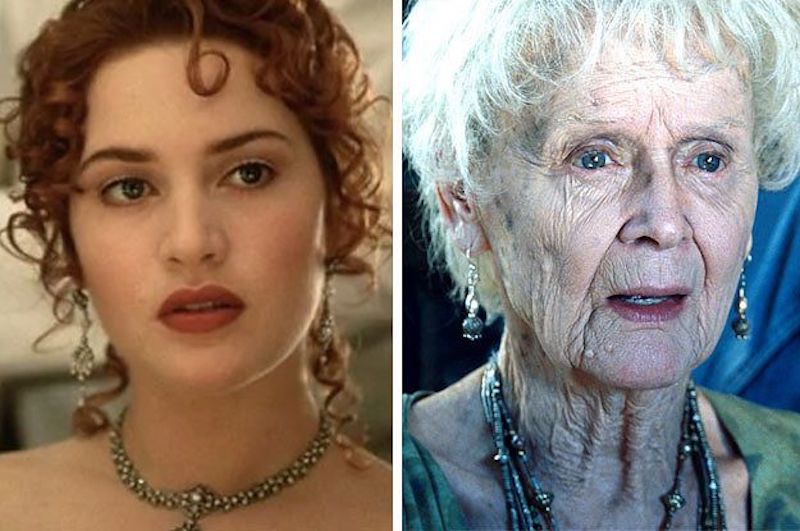 This is how Rose begins to tell the story she’s kept in her heart for so long. Her next words? “And I can still smell the fresh paint.”

From the first time I saw the film, I’ve remained struck by the mindfulness of that eight-decades-in-the-making observation. As Rose continues: “The china had never been used. The sheets had never been slept in.”

Translation: Use your senses. Be present. Pay attention. Appreciate and be grateful for the small details for they are the building blocks of a memorable and mindful life.

As Jack shows Rose his sketchbook, he turns the page to display a drawing of a woman he called “Madame Bijoux.” He explained: “She used to sit at this bar every night, wearing every piece of jewelry she owned, just waiting for her long lost love.”

If you go back and watch the scenes of old Rose as she recounts her experiences to the treasure hunters, you’ll see that she may very well be wearing every piece of jewelry she owned (with one notable exception, of course).

Remember Jack's final words to Rose: “You’re gonna die an old lady warm in her bed, not here. Not this night. Not like this, do you understand me? Winning that ticket, Rose, was the best thing that ever happened to me. It brought me to you and I'm thankful for that, Rose. I'm thankful. You must do me this honor, you must promise me that you'll survive. That you won't give up, no matter what happens, no matter how hopeless. Promise me now, Rose, and never let go of that promise.”

Eighty-four years after his death, Rose was still finding meaning in her grief and her promise — mourning Jack’s loss and honoring their short-lived but profound love. As I’ve written before, there’s no one “right” way to grieve. Remember Rose’s final words to Jack: “I’ll never let go, I promise.”

3. Don’t Look for Treasure in the Wrong Places

Here is the alternative ending for Titanic:

I’m quite grateful they chose the ending they did. To my mind, Rose had already said all the same things… without using words. But, thanks to YouTube, we can now hear her officially state the following as she prepares to toss the “priceless” jewel “back where it belongs”:

“The hardest part of being so poor was being so rich. But every time I thought about selling it, I thought of Cal and somehow, I made it without his help.”

When the ship’s captain practically drools over the diamond he has been searching for, Rose sagely advises him: “You look for treasure in the wrong places, Mr. Lovett. Only life is priceless. And making each day count.”

P.S. Just in case you’ve forgotten the genesis of that last sentence:

Even in the darkest of times, powerful and life-altering lessons exist all around us — if we remain open and pay close attention. Quite often, these teaching moments arrive in unexpected forms from surprising sources.

What priceless gems have you discovered?

3 Hidden Messages from Rose in ‘Titanic’ by Mickey Z, is licensed under CC BY-SA 4.0