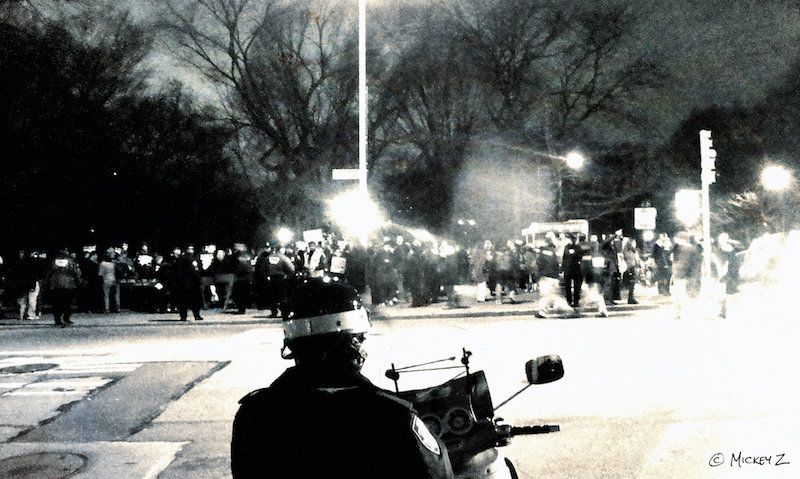 Perception: There’s more awareness and activism and people on the streets than ever.

Reality: We are on brink of social, economic, and environmental collapse.

What’s behind this disconnect and why hasn’t all this street activism helped?

1. Street activism reinforces negative public perception. To the average person, an activist is a fringe character. A fanatic. A wild-eyed zealot who sees the world in black-and-white terms. This perception exists for two primary reasons. Firstly, the corporate media works relentlessly and effectively to portray activism in a negative light. Secondly, many dissidents are wild-eyed zealots who see the world in black-and-white terms.

For example, I can remember (several times) standing out in sub-zero temperatures with a handful of others, protesting something or other. We’d felt so proud of ourselves. It was so dedicated of us to be risking our own health “for the cause.” When I’d share photos later (see reason #2) I’d use self-serving and self-deluding captions like: “This is what commitment looks like.” Meanwhile, the people walking past such “protests” would look at us like we were, well, wild-eyed zealots. Some even yelled stuff like: “Get a life!” and “What’s wrong with you people?” I can finally see now how ridiculous we must’ve looked and how grandiose it was to assume we were doing anything even remotely productive. Multiply my experiences by thousands of events for thousands of “issues” across the country every single day and you have a self-fulfilling prophecy of failure. (You also have a recipe for lesser evilism like the recent #FeelTheBern diversion.)

2. Street activism is more about cops, “symbolic” arrests, and social media. One of the more counterproductive yet enduring activist tendencies is to focus way more time and energy challenging cops than challenging the dominant culture those cops are serving and protecting. So to all you “radicals” (especially white activists): if you really wanna' goad cops into arresting you and/or scream “fuck the police,” please recognize that such gestures will do absolutely nothing to bring about serious, sustainable social change or to help lure more folks into activism. Yes, we must expose Blue Bloc malfeasance and stand in solidarity with those most commonly victimized by police behavior. But if we lose sight of the big picture, well, we’ve seen that show a few thousand times, haven’t we? In fact, it’s playing 24/7 on a YouTube page near you.

3. Street activism gives us the illusion of being a threat. If street activism posed any threat to the status quo, they wouldn’t sell us permits to perform it. It’s all part of the wink-wink-nudge-nudge facade of the Land of the Free™. The elites snicker as they agree: Let the silly activists chant and sing. It’ll create the impression we tolerate and even appreciate dissent. Then we can smirk and haughtily remind folks that “this isn’t allowed in many other countries, you know?” And if the protests appear like they may catch on, we release the big illusion.

What’s the big illusion, you ask? Surely you know. We all know and we’re all complicit: It’s when the Blue Bloc is told to viciously crack down on the hapless protestors. The disproportionate brutality of their response will appear to send a tacit message to the ineffectual activists: “You’re scaring us so we’re shutting you down.” Of course, this isn’t even close to true -- but tell a group of social media-pumped sign holders that they’re dangerous, and you can be damn sure they won’t ever try tactics that might actually work. Why risk everything by escalating when our puppets and V for Vendetta masks have the State in a panic, right?

In the end, everyone imagines they’ve won:

In the end, of course, everyone loses.

Mickey Z. is the author of 13 books, most recently Occupy these Photos: NYC Activism Through a Radical Lens. Until the laws are changed or the power runs out, you can “like” his Facebook page here and follow his blog here.

"3 BIG reasons why street activism doesn’t work (and usually makes things worse)" by Mickey Z. is licensed under a Creative Commons Attribution-ShareAlike 4.0 International License.
Based on a work at https://worldnewstrust.com/3-big-reasons-why-street-activism-doesn-t-work-and-usually-makes-things-worse-mickey-z.