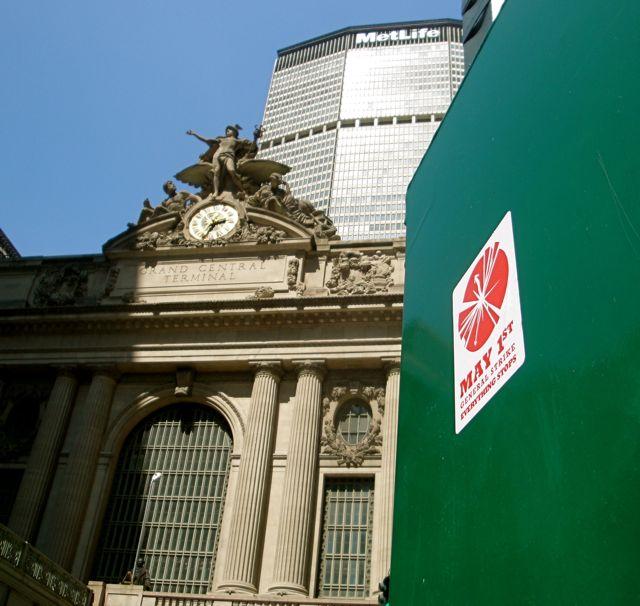 "What are you rebelling against?"
"Whaddya got?"

The nature of top-down rule, of course, is to leave those on the bottom throwing up their hands in resignation, heaving a collective sigh, and concluding: Whaddya gonna do?

I'll let you in a secret or three: We are not alone, we can make a difference, and what we're "gonna do" is occupy a goddamned strike on May 1.

Why May 1? Across the globe, this date is widely celebrated as International Workers' Day while here in the United States, its roots lie in the late 19th century struggle for a shorter workday.

Why occupy? Please allow me to suggest (in no particular order) a thousand reasons why activists in the United States must strike on May 1...

To get started, I suggest you ponder this: If the United States is the world's shining light -- as we're so often told -- why are its citizens left with no choice but to organize in a desperate attempt to defend human, environmental, civil, and animal rights?

Why can't we drink water or breathe air or eat food without the risk of becoming ill from corporate-produced toxins?

If the American way of life is so sacred, so ideal, so worthy of being defended by any means necessary, why do we need so many homeless shelters, alcohol and drug rehab centers, rape crisis hotlines, battered women's shelters, and suicide hotlines?

If the U.S. of A. is the zenith of human social order, why does our vaunted way of life provoke terror as a tactic and an emotion?

The U.S. Department of Defense -- the interventionist institution formerly known as the War Department -- is the biggest polluter on Planet Earth, for example, releasing more hazardous waste than the five largest U.S. chemical companies combined. To add insult to injury, the world's worst polluter also gobbles up 54 percent of taxpayer dollars.

A small taste of what we're getting for all that money: A decade after the U.S.-led invasion, Afghanistan has the highest infant mortality rate in the world -- 257 deaths per 1,000 live births -- while 70 percent of the population lacks access to clean water. Meanwhile, in Pakistan, it's been found that one in seven U.S. drone strikes result in a child fatality.

Here in the land of the free,  one in 31 adults is in prison, on parole, or on probation, corporations enjoy "personhood," 50 million are without health insurance, 2,660 children are born into poverty every day, and the two-party deception still rules -- thanks to corporate media propaganda (by age 18, the average American has seen roughly 360,000 TV commercials and by age 70, will have spent ten of those 70 years watching TV).

Here in the home of the brave, women earn 77 cents for every dollar a man is paid, 44 percent of the U.S. death row population is African-American (an ethnic group that constitutes a mere 12.6 percent of the nation’s people as a whole), total student debt now exceeds the total consumer debt and just passed $1 trillion, and every 46 seconds, a woman is raped.

We Americans -- the most privileged of the 99% -- must be willing to accept that there is something terribly wrong with our country. We must also accept that it's now or never.

We must also occupy the big picture -- the global picture -- and strike against: Hydro-fracking, tar sands extraction, GMOs, animal experimentation, nuclear weapons and waste, annual worldwide use of pesticides of 500 billion tons, and a frightening, mostly ignored 30 percent rise in ocean acidification.

Occupy against animal byproducts being responsible 51 percent of annual worldwide human caused greenhouse gas -- all in the name of an industry also responsible for unspeakable animal cruelty along with an epidemic of preventable human diseases.

Strike because under-nutrition contributes to five million deaths of children under five each year in developing countries. Occupy because every square mile of ocean now hosts 46,000 pieces of floating plastic.

Occupy because the planet's leading cause of human death and illness is diarrhea and 88 percent of these deaths are directly linked to a lack of access to safe water. Strike because every 20 seconds, a child dies as a result of poor sanitation (1.5 million preventable deaths each year).

Strike to challenge all classism, racism, sexism, speciesism, ability-ism, patriarchy, homophobia, and any other form of discrimination, hierarchy, and repression.

Why strike on May 1... and occupy every day?

This is but a minute sampling of what business-as-usual has wrought. Yeah, I know it's not 1,000 reasons. I could go on... and on and on, but I'd rather hear from you.

What are you occupying for/against and why are you participating in the May 1 General Strike? Give voice to your concerns, your passions, your anger, and your love.

My reason: I'm striking because we are on the brink of social, economic, and environmental collapse and therefore, this is the best time ever to be an activist.

When else in all of human history have we been in a better position to shape the future? What we do (or don't do) in the next few years will tilt us all toward either the point of no return or a far more sane culture.

In other words, each and every one of us can take part -- right now -- in creating the most important social changes ever imagined. What an extraordinary time to be alive.

No more denial. No more excuses. No more pretending everything is okay. No more waiting for someone else to step up and do it for us. It's now or never.

Strike on May 1 so we let the 1% know how badly they need us.

Mic Check: We don't need them.

This isn’t about skin color, gender, sexual preference, or what parcel of geography you happen to have been born on. I'm not talking about party affiliations, incremental reform, or what sky-god you've chosen to worship (or not). It's all about recognizing a crisis and taking the appropriate measures... now.

And it all starts with us. How lucky are we? We've been trusted with the most vital mission in the history of human struggle: survival.

I'll see you at the barricades...